Paper presents a regionally segregated overview of the globally distributed operational Concentrated Solar Power (CSP) plants. A holistic approach was followed by dividing the global map into 5 different regions (Americas, Africa, Europe, Asia and Australia) by covering 112 currently operational CSP plants. The objective of the research methodology used is to enable concerned regional developers to study the local trend followed in brief and compare the same with the trend followed in other regions. Region 3 (Europe) generates 6338.33 GWh/yr of electricity and accommodates more than 50% of globally operational CSP plants. 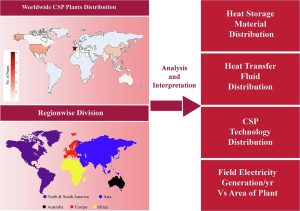 Energy can be referred to as the convertible currency of technology. With the world entering the second year of global pandemic, significant decrease in global energy demand has been observed. This is majorly because of prolonged restrictions on movement of people due to the third wave of the pandemic. But even with reduced energy demands, CO2 emissions related to global energy generation peaked towards their second-largest annual increase ever. Demand for all fossil fuels is expected to increase significantly in the upcoming years to meet post-pandemic energy needs. The era of Covid-19, however, saw boost in renewable sources of energy. The renewables demonstrated growth of 3% in 2020 and are ready to rise across all crucial sectors – transport, industry, power, and heating. The advent of advanced sustainable energy generation sources has driven people towards low emission, greener world. Among these, Solar and wind-based plants are estimated to contribute about two-thirds of the growth in renewables. As per IEA’s (International Energy Agency) global energy report, the electricity generation contributed by renewables is projected to increase to almost 30% in 2021. About half of this increase in global renewable electricity generation is to be produced by China. The other major contributors following China’s lead in the sector are United States, the European Union and India [1].

In solar based energy sector, two major technologies are used for electricity generation. These are namely- Solar Photovoltaics (PV) which runs on the principle of using light energy for electricity generation, and CSP that utilizes the heat energy absorbed from the solar radiations to generate electricity. Recently, between the two technologies, the PV technology has undergone significant growth along with substantial decrease in cost, while CSP’s deployment is still under progress and lags behind its peers. However, the increase in share of PV is accompanied by numerous challenges concerning system integration. The rise of such challenges favours the growth of CSP. CSP plants can be combined with thermal energy storage (TES) and co-firing to tackle the energy supply–demand variability. It is necessary to understand their economic and environmental impacts to determine a single solar based technology as a sustainable candidate. The PV technology is less costly based on a direct technology application and hence is deployed sooner. However, as the supply shares of PV increase significantly, their integration costs shoot up so high that it gives CSP systems a competitive advantage and enables their rapid development, eventually surpassing PV [2]. Ahmadi et al. [3] conducted a cost analysis study for PV and CSP power plants. Initial investment cost of CSP power plants is higher when compared with PV plants. However, the economic returns of CSP plants are better in comparison with PV power plants. Another study done by Dale [4] concluded that wind energy has the lowest energy costs, followed by CSP and then PV. A comparative study was conducted by Desideri et al. [5] to compare the environmental effects of these technologies. Impacts of assembling, commissioning, operation, and decommissioning PV and CSP plants on the environment were also studied. Assembly of PV systems has more environmental effects than CSP plants. Thus, it inclines one to explore further the current CSP scenario and understand the present continual benefits of the same.

There have been numerous studies on perspectives and research concerning CSP’s global and local contributions. Fernandez et al. [6] summarized new trends and recent trends in CSP technologies employed in commercial CSP plants. Cost of the CSP technologies was analysed and their evolution during the past years was reviewed. This was done by focussing on thermal storage proposed and used in these systems. Awan et al. [7] summarized the current global status of parabolic trough collectors (PTC) based commercial CSP plants. Technological development and issues pertaining to PTC technology were covered. Ya-Ling He et al. [8] overviewed the present status and development tendency of CSP and listed out barriers against high-temperature CSP. Kabir et al. [9] investigated solar technologies and discussed the present and future opportunities and barriers. Hansen and Mathiesen [10] presented a novel approach to evaluate the potential of utilizing solar thermal technologies in Europe. Employing renewable energies, specifically solar thermal energy, to achieve European defined targets were assessed for Germany, Austria, Italy, and Denmark. Countries were selected under several criteria, including substantial heat savings, expansion of district heating networks, and high-renewable electricity and heating sectors. Sankalp et al. [11] studied the financial viability of CSP technologies and analysed the potential of CSP systems in India at different locations. The country was divided into 5 major climatic regions and then chose 2 cities from each region. Even after dividing the country into climatic regions, the authors selected cities for their analysis because of availability of DNI (Direct Normal Irradiance) data for a particular site location. Hernandez-Moro and Martínez-Duart [12] observed that PV always seems more appropriate for areas located in middle to high latitudes of the Earth. At the same time, CSP systems, preferably with thermal storage incorporated, yield their best performance in arid areas located at relatively low latitudes. CSP technology uses only direct solar radiation to concentrate it, while PV uses both direct and diffuse irradiation. Therefore, while projects of PV power plants will look at the global irradiation value, CSP developers tend to consider the value of DNI since sun-tracking systems allow concentrators always to be normally orientated towards the sun. The low limit value of annual DNI for CSP plants to achieve economic performance is generally set between 1900 kWh/m2 and 2000 kWh/m2. DNI data is available and measured based on longitude and latitude of a location. This is impossible to carry out simulations for extended geographical regions. Hence, average DNI data of states or specific locations are considered. Also, when it comes to developing CSP projects, government policies and state governance play a crucial role.

CSP global distribution is divided into 5 regions (North and South America, Africa, Europe, Asia, and Australia) in present work to accommodate factors discussed in the above paragraph while reviewing the current status of globally operational CSP plants. Present study aims to bridge the gap between the technological working of energy sector and multitudes directly or indirectly affected by these. People relate to a topic more when it affects and concerns the place they live. The idea of encapsulating all countries into 5 continental regions of the globe should provide a holistic approach. The regions obtained after segregation are further studied concerning their contribution and characteristics such as CSP technology employed, storage materials/systems used, and illustrated relation between electricity generation per year vs. area occupied. This work shall also guide policymakers and system researchers to develop better state-of-the-art CSP plants.

CSP is attracting the attention of researchers and developers worldwide due to its advantages (economical operating cost, good scale-up potential, and high efficiency) [13], [14]. CSP plants utilize concentrated solar energy to convert into electricity. A traditional plant is made up of four important components, namely: a concentrator, a high temperature solar receiver, a fluid transport system and a power generation block (e.g., Rankine cycle, Brayton cycle, and Stirling cycle) [15]. As per

CSP technology has captured global interest as a solution to meet the energy demands of the growing population [19]. Heavy investments have been made internationally in developing these technologies. Installation of commercial systems is being done since 2005. However, we still lack sufficient experience to transform CSP into a reliable, low-cost source of electricity. The various technologies adopted are yet to be optimized, both technically and economically [25].

Plants are divided based on the country/region to study the operational CSP plants effectively and efficiently. It also enables brief overview of differences in plant operations and characteristics within the regions and from one region to another. For each region, CSP technology counts and distribution, TES system materials and HTF used, and the relationship between the electricity generation (MWh) per year of the plants and the area (hectare) have been elaborated. The regions are as follows:

Present compilation aims to guide and create a wider scope for tackling the development and application of CSP plants worldwide. It provides regional characteristics and contributions of the currently operational CSP plants globally. The current trend of the CSP technologies and HTF/HSM used has been depicted in Fig. 23. Thermal Oil and parabolic trough are the most commonly used HTF/HSM and CSP technology employed in 46 operational plants worldwide. The following conclusions are drawn from the

The authors declare that they have no known competing financial interests or personal relationships that could have appeared to influence the work reported in this paper.

There is no direct funding for this work. Authors are highly thankful to the Centre for Energy and Environment, Delhi Technological University for providing basic facilities for compiling this research work.