Several recent tenders have reinforced the relevance of concentrated solar power (CSP) as dispatchable green energy in China’s hybrid wind-solar-storage “base projects.” The common pattern is a hybrid complex of 1 GW, with 100 MW of CSP present. Most Chinese provinces have energy storage requirements for utility-scale wind and solar plants at this point, and it seems that in these large desert complexes, CSP is preferred, as there is often no mention of batteries. 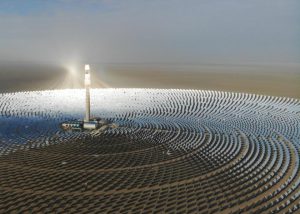 In our CSP forecast we predicted around 15 GW for China come 2030, but that was before Xi Jinping threw his weight behind the “base project” initiative, which should see 400 GW of utility-scale wind, solar and assorted energy storage built across China’s northwest by 2030, if not earlier. Maybe we should now be predicting as much as 20 GW.

In just the past week we’ve seen China Three Gorges Corporation tender for the Owner’s Engineer position at two of its CSP projects in Qinghai Province – both 100 MW in scale, one attached to a 900 MW photovoltaic complex, the other to a 1 GW plant. Both are part of the broader “Wutumeiren Solar Power Base,” and both are to be commissioned by the end of 2023. There was also the tender announcement for Huaneng Akesai’s 700 MW complex, with 400 MW wind, 200 MW photovoltaic, and 100 MW CSP. In Gansu Province, the scale of CSP-inclusive complexes has reached 2.25 GW, with at least 400 MW of CSP.

The very first such project in Xinjiang began construction earlier this month – the $1.02 billion, 1 GW Huadian Urumqi 1, predicted to generate 2.5 TWh annually – so a capacity factor of 28.5% – and uses 6 MW wind turbines, the largest onshore turbines deployed so far in the country. The exact breakdown of wind, photovoltaic and storage (of whatever type) wasn’t shared, but old plans had it at 800 MW wind and 200 MW photovoltaic.

The highest ratio of CSP energy storage seen so far is 400 MW alongside 1.6 GW of photovoltaics, being developed by China General Nuclear Power Group in Delingha City in Qinghai Province – though the duration of the energy storage in this case is only 6 hours, as opposed to the more normal 8 or 10 hours.

At this point, molten salt towers totally dominate the scene in China, although there is most likely still some parabolic-trough work, and the pilot fleet included Fresnel and Sterling-dish. China General Nuclear Power already has a 50 MW CSP plant operational in the city, and it’s parabolic-trough.

Eventually hydrogen electrolysis will be integrated into these complexes on a grand scale, and while it is little in evidence so far, State Power Investment Xinjiang Energy and Chemical Industry is setting up a 3 MW “photothermal coupling catalytic hydrogen production” pilot zone in Tacheng, Xinjiang.

The National Energy Administration (NEA)’s latest “Guiding opinions on Energy Work in 2022” includes a commitment to “Solidly promote the construction of solar thermal power generation projects in large-scale wind power photovoltaic bases in deserts, Gobi and desert areas.” As of December 2021, three “experimental” and nine “commercial” CSP power projects were operational in China, with total capacity of 521 MW, with another 500 MW under active construction.

Even Zhejiang Province has mentioned supporting enterprises to build “thermal+storage capacity” as part of the development of green industrial parks in the province. Realistically CSP is only cost-effective with consistent irradiation to keep salt molten at DNIs of 1600 kWh or more – a proposal for a 90 MW project in Thailand at 1400 kWh is the lowest we have seen so far, and Zhejiang has a DNI rating of only 800 kWh. So this must refer to small-scale battery projects on the 20 MW scale which are being installed at existing coal power plants for frequency regulation, something being pursued also in Anhui Province and Shanghai.

It may also refer to manufacturing CSP equipment in Zhejiang for projects in the country’s north. One of China’s CSP manufacturers, Kesheng Technology has received an award from the Zhejiang Department of Economics and Information Technology for its “intelligent heliostats”, which were used in at least three of China’s CSP pilot projects.

Meanwhile CSP has passed a milestone on the other side of the planet in a major future market – Brazil, which now has its first ever CSP project, a 500 kW parabolic-trough setup.