Concentrated solar thermal (CST) technology concentrates sunlight onto a target to create very high temperatures. This heat can be used directly in industrial processes or to generate electricity by heating water for steam to turn a turbine. 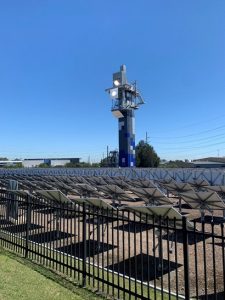 Harnessing renewable energy to decarbonise Australia’s industry is one of our biggest challenges. As lowering emissions becomes essential for industry and the community, we are looking at new ways of generating thermal energy from sunlight. Our challenge is how to make this solar a reliable, stable part of Australia’s energy future.

Heliostats are sun-tracking mirrors that concentrate sunlight by focusing it onto a target, generating temperatures of hundreds of degrees. In a heliostat field, a central receiver system or ‘power tower’ is used to harness the heat of the sun.

Rather than letting it radiate onto the ground, each heliostat magnifies solar radiation by focussing the reflected energy into a small focal point on the tower. A large number of focused heliostats produces a tremendous amount of heat.

Although many commercial CST power stations are already in operation overseas, research is needed to lower the cost of CST technology. We aim to make electricity from CST competitive with fossil fuel-generated electricity in Australia through the Australian Solar Thermal Research Institute (ASTRI).

Our Energy Centre in Newcastle contains the only high-temperature solar thermal research facility of its type in Australia, home to the largest high-concentration solar array in the Southern Hemisphere.

The site has two facilities: Solar Field 1 and Solar Field 2. Both are operated from an elevated control room housing the centre’s communications and control systems. Each field contains a tower and a heliostat array that tracks the sun throughout the day, concentrating the solar heat to produce temperatures over 1,000 degrees Celsius (ºC).

Our CST demonstration and research facilities have been used to:

Recently, through ASTRI and the Australian Renewable Energy Agency (ARENA), CSIRO has been developing three high-temperature pilot-scale research facilities on the solar towers.

Tower 2 already has the Falling Particle Technologies installation, which is a system that uses solid media as the heat transfer fluid and thermal storage media. This system stores solar energy as heat up to 800 ºC. We are also building a high-temperature Integration Test Facility at Tower 2 using liquid sodium metal as the heat transfer fluid for temperatures up to 740 ºC.

On Tower 1, we are developing an ARENA-funded beam down reflector system for a pilot-scale 250kW thermochemical hydrogen reactor in collaboration with Niigata University, Japan. Initially, this facility will be used to generate hydrogen via the redox process, using ceria powder at temperatures of 1,100 to 1,400 ºC. This is a potential solar fuel pathway to generate hydrogen to export to Japan, competitive with hydrogen generation via electrolysis.

We are using solar energy to generate hot and pressurised ‘supercritical’ steam, at the highest temperatures in the world, outside of fossil fuel sources.

Commercial solar thermal power plants around the world use subcritical steam, operating at high temperatures but at lower pressure. If these plants were able to move to supercritical steam, it would increase efficiency and help to lower the cost of solar electricity.