Mr. José Barragán is the Vice President of Renewables Technical Services at ACWA Power. Founded in 2004 in Saudi Arabia, ACWA Power is a developer, investor, and operator of power generation and desalinated water production plants and is currently present in 13 countries in the Middle East, Africa, Central Asia, and Southeast Asia. It has 64 assets in operation, construction, or advanced development, producing close to 42 GW of power and 6.4 million m3 /day of desalinated water. ACWA Power is accelerating energy transition globally and is the most active in the Concentrating Solar Power (CSP) sector. 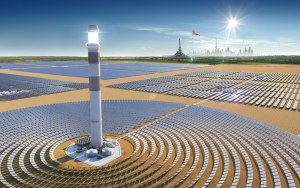 The company holds more than 560 MW of CSP in Operation, located in South Africa and Morocco, and another 800 MW under construction in Dubai (UAE) and South Africa. Recently, ACWA Power announced the financial closure of a new CSP plant, Redstone, in South Africa. Mr. Barragan, who has actively participated in this project, kindly accepted to respond to our following questions:

1.Mr. Barragán, could you please explain how Redstone works? What is the technology? Is there any difference with the last CSP that came online in Chile Cerro Dominador?

The Redstone project is based on central tower technology with molten salts. The plant uses two molten salts tanks, one kept cold at 300 degrees C and one kept hot at 565 degrees C. The molten salt is pumped from the cold tank to the hot tank going through the solar receiver. The solar receiver is located at the top of a central tower where solar radiation is concentrated by a  solar field with more than 41000 heliostats (25 m2 each). The molten salts are heated up to 565 degrees in the receiver panels (600 MWth net absorbed power) and stored in the hot tank (12 h capacity).  Independently, the molten salts are pumped from the hot tank to the cold tank going through a steam generator system (SGS). In the SGS, the feed-water coming from a rankine steam cycle is heated up and converted to superheated and reheated steam and feeds a steam turbine which is connected to an electrical generator producing 115 MWe gross power. This power can be dispatched whenever needed, as long as there is sufficient energy content in the hot tank. Conceptually, this technology is the same as in the Moroccan Noor 3 project, the Chilean Cerro Dominador project, and the tower unit in the UAE DEWA CSP (Noor Energy 1) project. The main particularity of the Redstone project is that the strategy of operation which aims to maximise the plant load factor during the peak time from 4.30 pm to 9.30 pm when a higher tariff is applicable. The plant is expected to be dispatchable from 5 am to 10 pm as the PPA. Therefore, the plant will not be operated on a baseload 24h basis as the Cerro Dominador project in Chile even though it is capable of doing so.

2.The project was announced a few years ago, however, the financial closure only came recently. What is the reason for this delay? Is due to any technical challenge? Or, on the contrary, is due to an external factor?

It has taken time to launch the execution of Redstone and both ACWA Power and our partners made tremendous efforts to financially close the project despite the challenges faced. There were a number of reasons that contributed to the delays; however, these were not related to the CSP technology itself. Due to the perseverance of ACWA Power and our partners, we were able to achieve the financial close of the project. This milestone would not have been possible without the continued support of various entities involved and we truly appreciate their active collaboration in this venture.

3.As we said before, ACWA is one of the leading renewable companies worldwide, with close to 42 GW installed, in construction or advanced development out of which around 34% are renewable. You, as VP – Renewables Technical Services, what is your opinion regarding CSP? How do you foresee the CSP future?

Last year, the COVID-19 pandemic impacted the world in an unprecedented manner. As the world starts to recover from this global tragedy and the tremendous economic disruption that it has caused, we must all remain mindful of the ongoing challenge of “climate change” as well. Governments, regulators, and people will have to be more decisive in our drive towards achieving Zero Emissions sooner. The power sector is contributing around 20% to global energy consumption, but electricity consumption will increase in the coming years, and this is an opportunity to contribute to decarbonizing the economy. We are witnessing a clear shift towards renewable energy, firstly because renewable energy obviously contributes to the much-needed reduction of CO2 emissions but, also because PV and Wind have simply become cheaper than conventional technologies already.  Due to the dramatic reduction in costs for renewable technologies in the past decade, we can potentially anticipate a strong deployment of wind and PV.  But these are variable renewable energy technologies of which the production cannot be dispatched. And this is exactly where CSP can contribute more effectively.  CSP has also seen a very strong cost reduction of 80% in the last 10 years and is complementary to PV and Wind because it is a dispatchable source of power thanks to its embedded cheap storage capability. With renewables technologies coming to the forefront, CSP remains a technology that should be considered given the need for more dispatchable energy and storage.

Any place which has good, direct normal irradiation and which integrates a lot of Wind and PV in its system can benefit from CSP technology.  Countries that will implement this as part of expanding their renewable capacity will derive long-term, sustainable value from their investment.

4.In Spain, the Government has announced 5 GW of new CSP until 2030, with the first auction already in 2021. How does ACWA Power perceive the Spanish market, in which they are not present?

At ACWA Power our focus remains on reliably and responsibly delivering power and desalinated water at a low cost in the countries we operate in. We are currently present in 13 countries and will continue to seek opportunities for growth.

“CSP should be considered given the need for manageable energy and storage.”