Startup founded by serial entrepreneur Bill Gross seeks to revitalize Concentrated Solar Power with sCO2 technology that lowers costs, water usage, equipment size and plant footprint — and supports industrial applications in which PV may not be able to compete. 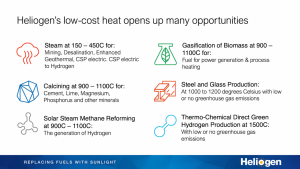 The U.S. Department of Energy (DOE) is betting big on supercritical carbon dioxide (sCO2) as the key to making concentrated solar power (CSP) not only cost competitive, but a major driver for decarbonizing high-temperature manufacturing processes.

Out of 67 solar research and development projects the DOE is funding with a total of $130 million, a single sCO2 project being developed by Bill Gross’s CSP startup Heliogen is receiving $39 million, versus the $1 million to $2 million doled out to others. According to the DOE website, Heliogen will use the money to “develop, build, and operate a supercritical carbon dioxide power cycle integrated with thermal energy storage, heated by concentrated solar thermal energy supplied by a newly built heliostat field.”

Heliogen’s proposed CSP plant uses sCO2 — essentially, CO2 that is halfway between gas and fluid — instead of steam to generate power. According to a 2015 DOE report, the use of sCO2 — which is twice as dense as traditional steam — is significantly more efficient than other types of turbine generation — lowering costs, water usage, equipment size and plant footprint.

According to a Nov. 12 announcement, the other 66 projects receiving DOE funding reflect a range of emerging and critical trends in the solar industry, from the use of artificial intelligence (AI) to non-wires solutions and agricultural applications; for example:

Arizona State University is receiving one of the smaller grants, $750,000, for research and development of an AI system that detects cell anomalies in solar panels, predicts failures and schedules maintenance.

StorEdgeAI, a Seattle-based startup, will use its $1.8 million grant to develop a non-wires distribution system that will circumvent the transmission and distribution grid to cut the delivered cost of solar energy to $0.15 per kWh by 2025.

Solar developer Silicon Ranch will also get $1.8 million to develop a solar tracking and control system that integrates plant operation with cattle grazing.

The DOE’s support for CSP is not new. Since 2007, the department has provided about $575 million in support for CSP research, with increasing amounts going to sCO2 projects in the past few years. The goal, according to the DOE website, is to lower the cost of CSP to $0.05 per kWh for “baseload systems with 12 hours or more of thermal energy storage, without subsidies by 2030.”

Whether that target is achievable — and whether it could make CSP cost competitive with PV or wind — remains an open question. While the International Renewable Energy Agency (IRENA) recently reported that the levelized cost of energy (LCOE) for CSP fell 47% since 2010, hitting between $0.21 and $0.24 per kWh in the U.S. in 2019, it’s still more expensive than PV’s LCOE of less than $.07.

What may have tipped the balance in the DOE’s decision to back Heliogen is the company’s next-generation CSP technology to produce temperatures of more than 1,000 degrees Celsius. Gross, a serial entrepreneur and founder of high-tech incubator Idealab, launched the company in November 2019 with backing from a trio of top investors — Microsoft founder Bill Gates, AOL founder Steve Case and cancer drug entrepreneur Patrick Soon-Shiong.

According to Heliogen’s website, the “ultra-high temperature heat” produced by its more efficient CSP technology can be used to power a range of hard-to-decarbonize industrial processes, such as the production of cement, steel and petrochemicals. In other words, applications where PV may not be able to compete.

Heliogen follows a pattern of Gross moving into the gaps in clean energy technology that market-leading technologies may not be able to fill. In 2017, he helped launch Energy Vault, the Swiss startup developing a long-duration storage technology in which 35-ton blocks are raised and lowered on a long, central tower to store and discharge power.

The outsize grant to Heliogen notwithstanding, what is significant about the DOE’s support for the company and other solar research is that the agency has survived the last four years of the anti-renewables Trump administration with its ability to fund cutting-edge research intact. And despite the current post-election turmoil, the solar industry is looking toward 2021 and the incoming Biden administration to push government support for clean energy research and policy even further.