Achieving a CO2-free power system will be only possible with a large share of dispatchable renewables. 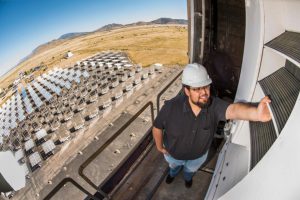 The undisputable arguments for a BRILLIANT STE future.
1. Technical STE is the only dispatchable and grid-friendly renewable technology with potential enough to firmly meet the electricity needs worldwide in order to achieve an almost carbon free generation system. A wise mix with other R.E. technologies will be the right choice.
2. Local Economic Development Local content of STE plants – and conversely its GDP contribution – should be one of the main drivers behind the coming supporting policies in most countries of the Sunbelt.
3. Affordable cost with higher value STE plants are already a cost competitive choice to supply the increasing power demand of emerging countries as compared with combined cycles and with “investing twice”, as it would be the case regarding other fluent R.E. technologies + CC backup. Furthermore STE plants will show important further reductions when approaching similar values of Wind (500 GW) and PV (400 GW) from the current 5 GW

As PV share increases its marginal capacity value vanishes
and its marginal operational and capacity values diminish dramatically.
But even in terms of LCOE: Generation costs for a STE system with 6 hours of storage is much cheaper than for a PV plant with batteries and they will remain lower at least until 2030.
Investments in grid compensation equipent would further reinforce the STE choice. The learnign curve for CSP is very consevative as it has been demonstrated recently with the new projects awarded around 7 cents/kWh.
It shouldn’t be forgotten that the generation fleet for 2030 have to start being constructed TODAY.
STE with thermal storage: the most efficient solution for dispatchable solar electricity. Solar Energy will supply the bulk of mankind’s energy demand sooner than later.
The two molten salt tank storage system – cold & hot – are being commercially used since 2008 with proven reliability and performances. One decade almost without degradation signs
STE tower plants require 3 time less salt volume than parabolic trough ones. Additionally they don’t require the oil/salt heat exchanger

STE / CSP is – and will continue to be – the necessary choice when planning addition of new capacity in sunny countries.

Regarding the further development of RES we should move from the current short-sighted COST approach to a full VALUE approach for upcoming investments. This will trigger a better balanced share between intermittent and flexible renewables in the power system – the only sustainable pathway to a true energy transition