Concentrated Solar Power + Storage Can Be Cheaper Than Coal

Concentrated Solar Power + Storage Can Be Cheaper Than Coal

A German – and formerly majority Australian owned – developer of concentrated solar power plants with molten salt storage says it can get the cost of electricity from a utility-scale version of its technology, with 15 hours of thermal energy storage, down to between 5 and 7 cents (US) per kilowatt-hour. 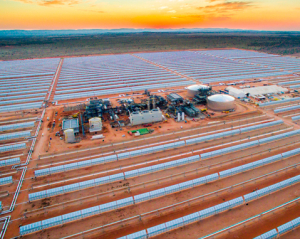 The claims were made in a white paper published this week by FRENELL, an outfit established by Novatec Solar – a Germany-based company that was formerly majority-owned by Australia’s Transfield – to develop and commercialise cost efficient CSP technology.

Its Direct Molten Salt (DMS) technology has been used at the 110MW Crescent Dunes power tower in Nevada US.

According to the paper, the DMS CSP technology can, at a scale of 50MW with 14-hour energy storage, deliver electricity prices of 9.3-12.2 US¢/kWh – a cost “already below today ́s average cost of fossil power generation.”

But as the chart above shows, the larger the plant’s capacity, the lower the cost of electricity falls. So a 100MW DMS plant with around 15 hours storage could deliver electricity price levels of 6.4-8.5 US¢/kWh – “lower even than (new) coal,” the paper says. And with its large and scalable molten salt energy storage systems, the use of expensive diesel generators to cover late-night demand peaks would also be mitigated.

The White Paper includes case studies from around the world, showcasing the most suitable applications of FRENELL’s DMS technology and the cost advantages over carbon-based power plants. Below is a chart modelling the generation and storage profile of the technology, both as a baseload and dispatchable service.

While there is no case study based in Australia, the paper does note that the DMS multi-tank energy storage system is particularly suited to countries like Australia, which have high shares of intermittent renewables, high electricity price variability, and significant coal-fired generation capacity expected to retire soon “due to economic pressure from competition with renewable energies and compliance with greenhouse-gas reduction goals.”

In the chart below (figure 56), the paper compares the DMS with 2015 electricity cost estimates by the California Energy Commission and finds it to be “the cheapest dispatchable energy technology at sun-rich locations in southwestern US.”

“Even at a relatively small-scale,” the paper says, “a FRENELL DMS plant of 30MW capacity already delivers cheaper electricity than other CSP technologies at larger scale and is comfortably cost competitive with far larger Combined Cycle power plants fired by natural gas.”

Another chart – below – compares the cost of electricity from FRENELL DMS CSP to the power purchase price for phase II of Morocco’s Noor CSP plant, at which the 160MW phase 1 was recently completed. As you can see, the DMS plant in both scenarios comes in lower than Noor II, and in one instance at lower than a coal-fired plant of the same size.

This is interesting because Noor 1 – currently the largest CSP plant in the world – has been criticised for its high cost of electricity, currently at around $0.18/kWh, although the World Bank has argued its development has already served to bring this cost down.

The main concern is that projects like Noor – which has so far cost nearly $US1 billion and could total $9 billion once phases II, III and IV are completed – will not be able to compete on cost with large-scale PV projects with battery storage.

But the report notes that CSP, in comparison with other renewables like wind and solar PV – which it concedes currently offer the lowest costs per unit electricity – cannot entirely cover the power demand curve.

“DMS CSP plants are able to deliver power on demand but at lower costs than using gas or coal fired power plants. This offers sunny countries the opportunity of a 100 per cent renewable energy power supply at the lowest cost option”, says FRENELL CEO Martin Selig.