This is the second such system installed by the Tamil Nadu Cooperative Milk Producers Federation, popularly known as Aavin.

Aavin is the latest government agency to harness solar energy for its daily operations.

In the vast open space in front of the Aavin dairy in Sholinganallur, the agency has installed Concentrated Solar Thermal (CST) systems. The hundreds of curved mirrors in the two structures generate steam to pasteurise nearly one lakh litres of milk a day. 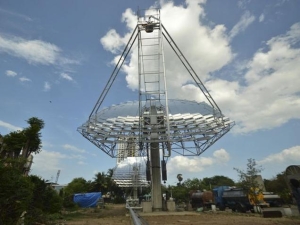 Aavin sources said that during pasteurisation, milk is heated to 78 degrees Celsius using steam that is generated through a boiler using furnace oil as fuel. But now, the CST has replaced at least a portion of the furnace oil.

This is the second such system installed by the Tamil Nadu Cooperative Milk Producers Federation, popularly known as Aavin. The first , installed in its Salem dairy last year, won the CST and Solar Cooker Excellence award 2016 from the Ministry of New and Renewable Energy.

The two systems at Sholinganallur cost around Rs. 1.20 crore of which Rs. one crore has been provided by the State government and Rs. 20 lakh by the Ministry. Put together, they can generate steam at 200 kg/sq. cm per hour. By this, the agency saves furnace oil to the tune of Rs. 2.20 lakh per month and in five years, the cost incurred would be recovered, explained an engineer associated with the project.

Aavin has been using solar power systems to heat water in all dairies in Chennai. Similarly, 100 of Aavin’s 299 bulk milk coolers in the State are using solar water heaters for cleaning the systems. The remaining coolers will be covered in phases.