Part greenhouse, part solar plant, this farm is harvesting food from the Australian desert. Officially launched in October 2016 at Port Augusta in South Australia after a six-year pilot, it’s the first outpost of Sundrop Farms. The company wants to make farming more resilient to climate change by using the desert’s plentiful sunshine, as well as piped-in seawater, to produce food in arid environments. «Our farm grows more than 15,000 tonnes of tomatoes each year,» says CEO Philipp Saumweber. That accounts for 15 per cent of the Australian tomato market.

Sundrop’s tomato plants are grown hydroponically, free of soil, in a watery solution fed by nutrient-rich coconut husks. «Intake water is pumped, using sustainable electricity produced by our concentrated solar plant, in a 450mm pipe over 5km to our desalination unit,» Saumweber explains. The solar plant, which flanks the eight-hectare building, is made of 23,000 mirrors reflecting the Sun’s heat on to a solar tower. This transforms 1,000,000 litres of seawater each day into fresh water. It also drives a turbine to generate electricity. Additional water is also taken from the roof of the greenhouse. 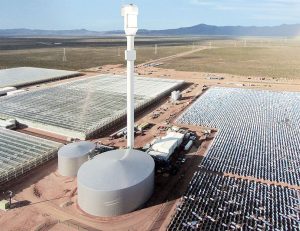 As seawater is a natural disinfectant, the farm can operate pesticide-free. The high-saline water left over from desalination is carried back to the sea. «Gravity is used to return water along the same course, in a larger pipe, where it is discharged into the sea only when salinity levels have returned to normal.»

Sundrop’s plant cost AUD$200 million (£116m) to build, including a $100 million investment from private equity firm KKR. In 2016, Sundrop expanded to Portugal and Tennessee in the US, where it’s building farms to meet the needs of local supermarkets. «This means that our produce complements what is already being grown locally, rather than competing with it,» says Saumweber. «Now that we’ve proved the commercial viability of our systems with Port Augusta, we’re aiming to bring Sundrop projects and produce to locations around the world,» he says. «This is unlike any other farm on the planet.»