An Australian company says its technology can help solve the problem of around-the-clock clean energy as Queensland gears up to become a renewable energy powerhouse. 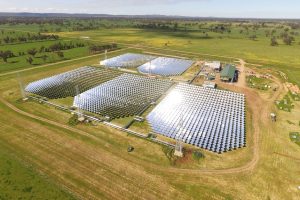 A concentrated solar thermal plant reflects sunlight into arrays at the top of towers.(Supplied: Vast Solar)

A chronic issue for the most common renewable energy sources — such as solar panels and wind farms — is an inability to store power, which forces the national grid to rely on coal-fired power overnight.

Vast Solar has been developing new technology for concentrated solar thermal power, a renewable energy source that powers more than 7 per cent of the Spanish national grid, and in which China is heavily investing.

Chief executive Craig Wood said the company had been developing concentrated solar power (CSP) technology for 13 years and was ready to scale up its prototypes — manufactured and tested in Goodna, near Ipswich — to contribute to the national grid.

«It’s a direct replacement for the overnight energy that is provided by coal-fired power stations,» he said. 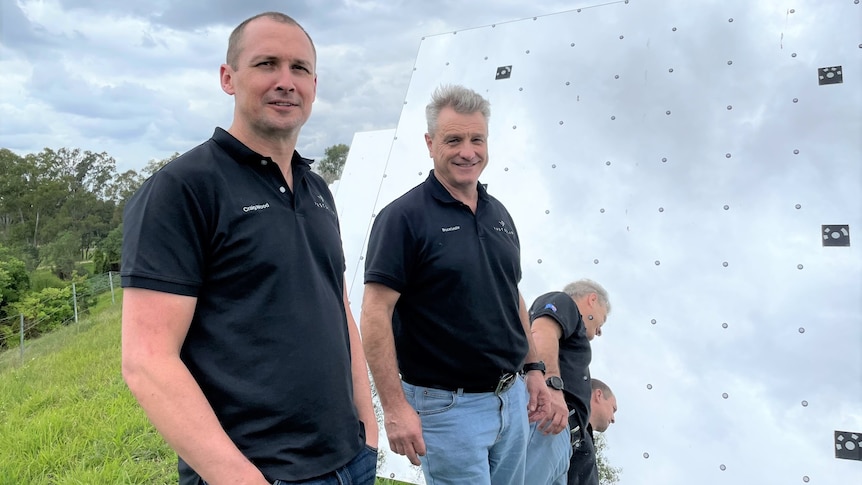 «And importantly the technology uses the same skill sets that are currently used in those thermal power stations, just in a renewable context.»

The technology uses large mirrors, or heliostats, to beam sunlight into an array on a tall tower.

Molten sodium is then pumped through the array and heated to more than 500 degrees Celsius.

That heated sodium can then be stored and used to generate steam to spin a turbine and drive electricity into the national grid — or as a clean energy source for large industry.

CSIRO head of solar research Greg Wilson said the technology could be located alongside a traditional photovoltaic solar farm, with the grid using solar panel energy during the day and switching to stored power at night.

«After hours when the batteries are all flat, and people want to continue with their air conditioner, or large industry wants to continue to work, that 12 hours of storage that the CSP plant provides allows us to have 24-hour renewable energy,» Dr Wilson said.

The CSIRO has been working with Vast Solar on developing and testing its newest research in the field.

Mr Wood said CSP was now cheaper than coal or gas and emitted almost no carbon dioxide when deployed in a full-scale facility.

Mr Wood said the plan was «hugely exciting» and one in which CSP could play a role, «allowing us to use existing transmission infrastructure while providing new jobs for power plant workers».

Energy Minister Mick de Brenni said in a statement there would be «ample opportunities» for industry to work with the state government on the plan, «including proposals like CSP».

Vast Solar is developing a 30-megawatt test plant in Port Augusta, in South Australia, to demonstrate to government and investors that the technology can effectively contribute to the national grid.

The project has $110 million in federal concessional funding and once it has the go-ahead, could be up and running in three years, with a life span of three decades.

«We’re working on securing the grid connection for that project,» Mr Wood said.

«What needs to happen for CSP to become a meaningful part of Australia’s electricity network is we need to get CSP plants built.

«The reality is with utility-scale power stations, people aren’t prepared to buy one until they can visit one.»

The company is also planning another CSP plant near Mount Isa, in north Queensland, on flat, arid land with excellent sunshine.

Vast Solar is not the only company working to bring CSP into Australia’s renewable energy conversation; Victorian business Raygen has received investment and federal support.

The sector’s growth suggests that interest in CSP may be growing after a decade of climate wars set it back.

In 2011, Campbell Newman’s government killed off a plan to add solar thermal to Kogan Creek’s coal-fired power station, and scrapped funding for another major solar plant in Queensland’s west.

«We are on the cusp of deciding where to locate those manufacturing facilities,» he said.

«Our strong preference is to locate them in Australia, because it seems to us Australians have taken all the risks of getting the technology to this point, and we should be taking the final step to make sure we’re manufacturing the technology here and exporting to the rest of the world.»

Dr Wilson said Australia missed the window to develop a domestic manufacturing industry for photovoltaic solar panels 10 years ago and it could take the opportunity with CSP to learn from past mistakes.

«Sovereign manufacturing is something that … we need to consider,» he said.

«We have the skill sets; we’ve just got to have the willingness to adopt the technology and invest in it.»