Sandia National Laboratories is using its solar tower to help assess the impact of extreme temperature changes on materials.

The tests, now in their second year, take advantage of the ability of Sandia’s National Solar Thermal Test Facility to simulate a very rapid increase in temperature followed by an equally rapid decrease. The testing is for the Air Force and will continue for at least another year.

Researchers put a 4-by-4-inch sample of composite material, called a coupon, into a test chamber, then expose it to a burst of intense heat. Different coupons are made of different types of materials.

Specialty ovens can reach the temperatures needed, but ovens can’t heat up or cool down rapidly. «And it’s hard to just stick a coupon in real fast and then take it out,» test engineer Josh Christian said. «Our facility is really good at providing a fast ramp rate for these heating curves, and we also can produce a trailing curve by moving our mirrors in such a way to remove the heat from the sample.»

The coupon is placed flush to a wall of a test chamber, basically a box, facing a quartz window that allows in the heat produced by the mirrors. The tests, which use about a quarter of the heliostat field, can change heat levels as needed.

Initially, sliding shutters in front of the window are closed. The solar tower team focuses reflected light from the heliostats onto a calibration panel and uses a heat flux gauge to measure the power that will hit the sample. Then they move that reflected light onto the shutters. When ready, the shutters slide open and close very quickly to produce the heating curves needed on the sample. At the same time, a wind tunnel with a blower on one end forces air across the sample, simulating convective cooling. Convective cooling impacts the heating rate since with convective cooling, materials survive longer under intense heat. 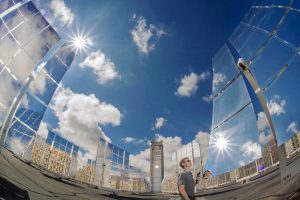 Sample could be heated several times

Researchers can subject a sample to heat multiple times to establish material response thresholds after exposure.

Before and after a test, another Sandia team checks the sample with a 3-D scanner, which determines whether the heat produced bubbles or texture changes in the material, Christian said.

Still another group of Sandia researchers takes reflectivity measurements—how much light is reflected from the surface. For example, if a sample absorbs 90 percent of the light and reflects 10 percent, then 10 percent of the light did not heat it. Josh said that’s important because in real life, materials with a high reflective value heat up slower.

A third team uses nondestructive methods to look inside the sample after a test, checking for changes below the surface, which is particularly important for complex structures made of several different materials.

Tests go on year-round, but the Air Force program does not test every day since the solar tower also does tests for other programs. Last summer, for example, Christian estimated 30 to 40 days were devoted to the project. Tests continue in the winter, but test periods are shorter due to the angle of the sun to the mirrors.

«For our facility, this is a major test that has started to become routine as we have tested hundreds of samples,» said Christian, who has worked at the tower for eight years.

The project also has led to improvements at the National Solar Thermal Test Facility, including a new tracking algorithm for the heliostats and advancing heat flux characterization techniques, which allows researchers to quantify the heat applied to samples. Knowing the exact heat applied is critical to understand what conditions materials can survive, and researchers developed new tools to help perform that analysis.

The mirrors move with the sun to keep a reflected spot on the solar tower, «but we were finding that at certain times of the year and times of the day, the spot wouldn’t be where we predicted it to be because of imperfections in how the mirrors were installed,» Christian said. So, he said, researchers developed algorithms to improve the tracking, which not only helps the Air Force project but also Sandia’s tower overall and potentially other facilities that use heliostats, such as sites that generate power.

The tower has done tests for other agencies, including NASA, and other projects for the Air Force. Sandia started tests for this project last year. «Now it’s become a success on our side as well as their side,» Christian said.