With the final tower sections in place, Aalborg CSP in collaboration with John Holland has reached a major milestone in the construction of a globally-unique integrated solar energy system. More than 23,000 mirrors will soon harvest and reflect the sunrays onto the top of this solar tower to enable sustainable operation of 200,000m2 greenhouses in the Australian desert.

The 127m structure consisting of 9 sections was assembled in short ten weeks. The top part, where the central receiver (boiler) is placed, altogether weighs 234 tons. The massive scope therefore required careful calculations to secure successful completion of what are understood to be the largest lifts to this height ever undertaken in Australia.

Once operational, the central receiver will gather the solar energy from more than 23,000 computer-controlled mirrors and convert it to steam which will then be used to produce multiple energy outputs. The Integrated Energy System will be able to heat the greenhouses in wintertime and on cold summer nights, to provide fresh water by desalinating seawater drawn from the nearby Spencer Gulf (5km from the site) and to run a steam turbine to produce electricity. The central receiver applies Aalborg CSP’s proven direct steam technology with natural circulation that has demonstrated excellent performance in some of the most efficient CSP power plants in the world.

“This groundbreaking project proves a new platform to address major global energy challenges. The construction progresses well and we are looking forward to harvest the first sunrays in the second half of 2016” – says Svante Bundgaard, CEO of Aalborg CSP.

Changing energy in the Australian desert

The Integrated Energy System is the first large-scale concentrated solar power-based technology in the world to provide multiple energy streams (heating, fresh water and electricity) for horticultural activities. Since construction has commenced, more than 23,000 computer-controlled mirrors have been installed in the desert ground. These mirrors will collect the sun’s rays and reflect them onto the top of the solar tower. 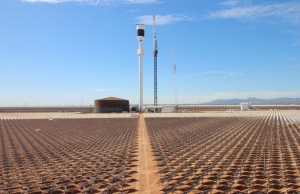 When the system goes operational, over 15,000,000 kg of tomatoes will be produced annually in the arid land of Port Augusta (South Australia) using sunlight and seawater as main resources. The groundbreaking concept of growing high-value crops in the desert originates from Sundrop Farms, which began testing its integrated system at a small scale in 2010. Based on the company’s positive operational experience from its pilot plant, Aalborg CSP was selected to design and deliver the large-scale solar technology with the aim of holistically satisfying the expanding Sundrop Farms greenhouses’ different energy needs at the lowest possible cost.

Besides offering a cost-competitive alternative to conventional energy technologies, the system will contribute to a greener future as it avoids the emission of at least 14,700 tons of CO2 annually. This is equivalent to 2,807 cars removed from the roads in a year.

Aalborg CSP is leading developer and supplier of innovative renewable technologies with the definite purpose to change the way we produce energy today. Relying on extensive experience from some of the most efficient concentrated solar power (CSP) projects around the world, the company designs and delivers green technologies and integrated energy systems to lower cost of energy for industries and power plants worldwide.

Aalborg CSP places strong focus on R&D activities and partners with knowledge-based companies and institutions to create leading-edge technologies. As a result, the Aalborg CSP engineering design is centred on a value-adding concept providing solutions that excel in operation, increase plant revenue and contribute to a greener future.

Headquartered in Aalborg (Denmark) and with sales & service offices in Spain, the US, Kenya, Uganda, Australia and Indonesia, Aalborg CSP has realised cost effective green energy solutions to a variety of industries worldwide.