This was stated by the Minister of Energy, Juan Carlos Jobet, who also said that by 2030 renewable energies will make up 70% of the energy matrix in Chile. The statements were in the framework of a virtual conference organized by the Cerro Dominador firm, which manages the construction of the concentrated solar power (termosolar) plant of the same name, which is expected to start operations before the end of the year.

At the event, another concentrating solar power plant, Likana Solar, was announced to be installed in the town of Calama, in the Antofagasta region, with an installed power of between 450 and 600 MW, with the participation of prominent exhibitors and panelists from the field of investments, energy and environment, the first virtual discussion of the Sustainable Energy Cycle organized by Termosolar Cerro Dominador called «Investments to face Climate Change» was held.

Benoit Felix, Global Head of Project Finance at Santander Corporate & Investment Banking; Marcelo Mena, Director of Climate Action and former Minister of the Environment; and Francisco Alliende, CEO of Grupo Saesa, referred to the opportunities, in terms of economic reactivation and development, presented by investment in renewable energies and new technologies. 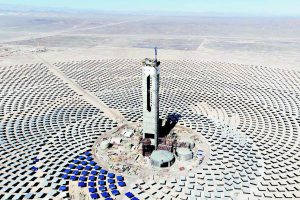 The context is changing, and there are different signs that lead us to affirm that this is the best time to invest in Renewable Energies. Without going any further this year, in the midst of the pandemic, investment in renewables grew by 5% worldwide, compared to the same period in 2019. In fact, the HuellaChile Program, of the Climate Change Office of the Ministry of the Environment, promotes the Management of Greenhouse Gases in public and private entities. About 950 organizations, mainly from the service, port logistics, pharmaceutical and industrial areas, have already signed up.

One of the most efficient ways to support sustainable reactivation is through investments in Renewable Energies. Among them, the Concentrated Solar Power or thermosolar technology stands out, which is the one developed by Cerro Dominador, the largest CSP project of its kind in Latin America. In this context, the company convened this discussion precisely to discuss the possibilities presented by these technologies and renewable energies in general to contribute to the economic reactivation.

The event began with the words of Juan Carlos Jobet, Minister of Energy, who referred to the commitments that the Government has taken in relation to renewable energies and also to the potential of the Concentrating Solar Power. “We believe that before 2030 NCRE will make up 70% of the energy matrix; in the last 6 years, solar and wind energy participation increased 10 times and our commitment for 2040 is to withdraw all coal-fired plants. In addition, we have invested 20 billion dollars in renewable energy projects, without a doubt the energy sector will be a fundamental pillar in the sustainable recovery. But our renewable capacity must be combined with technologies that allow solving intermittency and solar thermal will have a central role since it is capable of guaranteeing energy 24/7, for this reason we believe that it will become increasingly relevant and according to our estimates for 2050 it is expected that more than 20% of the matrix corresponds to solar thermal”.

Later, Paula Estévez, General Manager of AmCham spoke about the importance of sustainable investments in the context of a pandemic. “The North American business community represented at AmCham is committed to a sustainable reactivation along with the recovery of jobs lost due to the pandemic. Today we have the opportunity to «Build Back Better» to imagine and build a more sustainable economy with opportunities for everyone including the next generation, «he said.

Finally, before giving way to the experts’ conversation, Fernando González, CEO of Cerro Dominador, referred to the role of 24/7 renewable energies in the reactivation, in addition to delving into the potential of the Concentrated Solar Power technology for the decarbonization of the national energy matrix. “In Chile, in the context of the pandemic, the commitment to Carbon Neutrality for 2050 is strengthened, accelerating the country’s decarbonization plan for 2040. In this sense, the role of renewable energies is key, due to lower prices and competitiveness, in addition to the positive impact on job creation, environmental impact and social acceptance”.

In addition, González presented the pipeline of the Cerro Dominador group projects for the following years: Pampa Unión and Likana Solar. Pampa Unión is a photovoltaic project and is located in the Sierra Gorda commune in the Antofagasta region. It has RCA approved for 210 MW and it is expected to extend to 600 MW in the future. Likana Solar, as it is located in the town of Calama, contemplates the construction of 3 towers with a 12-hour energy storage and will have an installed power of 450-600 MW, which positions it as one of the renewable power plants with the highest capacity of the world. A net annual energy generation expected by this last project of more than 2,400 GWh / year is projected

Then, during the conversation panel, moderated by journalist Andrea Aristegui, Benoit Félix from Banco Santander, Marcelo Mena from Acción Climática and Francisco Alliende from Grupo Saesa, they discussed the financial, global and local scenario, to invest in Renewable Energy and how Governments and companies are preparing for this new scenario and to accelerate the process towards a sustainable economy.