Most people think that CSP (Concentrating Solar thermal Power) plants are large and expensive. But what about this?

The Micro-CSP technology from Aora Tulip has a lot of advantages.

This ‘micro technology’ is modular, hybrid, uses minimal water and is ‘cheap’. 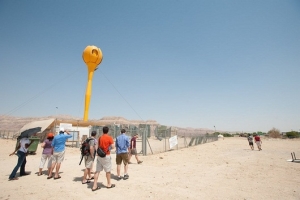 Most systems are based on large steam turbines with high overhead costs. They are cost effective by building large-scale production plants of 50 to 100 MW or more.

These systems require thousands of mirrors spread over a large area. That’s why most of these plants are built in areas far away from the consumer. Consequences: loss of electricity during the transportation.

The CEO of Aora Solar’s ZEV, Rosenzweig calls their system “micro-CSP technology”. It is based on a small gas turbine with a capacity of 100 kW, with the heliostats close to the top of the tower.

Rosenzweig calls his system ‘nimble’ comparing it to conventional plants, which he characterizes as dinosaurs.

“A small power plant can easily supply as much energy for an entire village. This mini-grid is more cost-effective than individual PV facilities per household. Small communities are no longer dependent on an electricity network from far away.”

The Government of Ethiopia has recently signed a ‘memorandum of understanding’ for different plants, after they had visited the demonstration plant in Almería, Spain.

AORA’s Almeria power station is situated on half an acre of land in Platforma Solar Almeria, the world’s largest and most exclusive science park dedicated solely to the research and development of solar-based power-generating systems. The plant consists of a field of 52 tracking mirrors (heliostats).

A typical Ethiopian village needs about 68 kW, perfect for the capacity of a Aora system. And the system can be easily extended!
The compact mirror field is reduced to 2,700 m2: a little more than half a football field.