Rumours of concentrated solar power’s (CSP) death have been greatly exaggerated, or so you would think from the boom in gigawatts coming online in the next few months.

Almost 1.3GW came online this year or is due for completion next year, with a total of 2.7GW in signed power purchase agreements. These projects, sometimes costing close to US$1 billion or more, have been in the pipeline for four or five years. But the signs are that in another five years, this US pipeline will have run dry, like a river running into a desert.

BrightSource’s 377MW Ivanpah has been a shining example of CSP this year. SolarReserve’s 110MW plant Crescent Dunes in the Nevada desert is set to be CSP’s shining star in 2014. But although of the same generation of CSP, the companies were separated almost at birth. SolarReserve is like BrightSource’s little brother who watched the missteps of his elder sibling and chose another direction in life.

Crescent Dunes will be the first commercial-scale CSP project in the US with storage capability because of its molten salt technology. It has a 25-year PPA with Nevada Energy, the utility that lights Las Vegas.

But that’s not the only difference between these companies that at least at conception could once have passed for identical twins.

Founded in 2008, SolarReserve also started developing PV projects a year later. I recently sat down with Kevin Smith, the company’s CEO, to talk about SolarReserve and why its business model would see the company thrive – mostly because it looked beyond the US and CSP.

"BrightSource made a decision a number of years ago when PV prices were high and solar thermal was lower that they weren’t going to focus on storage technology," he said. "The Ivanpah project is a great project but has no storage.

"BrightSources’s challenge now is to transition to storage. They are going to struggle; they need to move from a direct steam type system and move to storage. 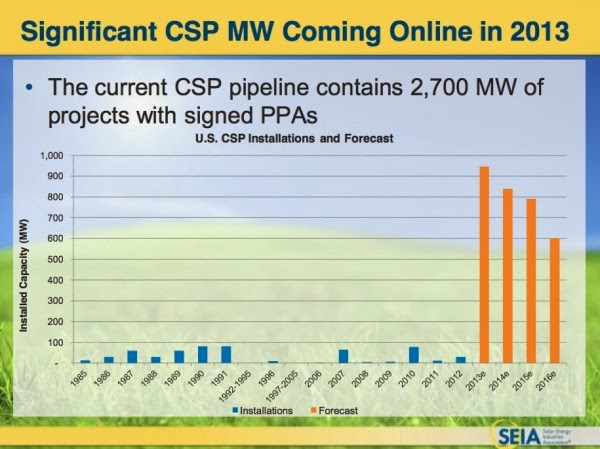 "Crescent Dunes will generate about 500,000MWh per year because of the storage costs, which is about twice what you’ll get out of a conventional PV or BrightSource direct steam. Each Ivanpah unit is around 130MW but will only generate 250,000MWh a year."

BrightSource’s 500MW Hidden Hills project with storage got cancelled earlier this year. Its slow shift to storage was compounded by a lack of diversity – both in geography and technology. And its 500MW Palen project was provissonally rejected by the California Public Utilities Commission earlier this week.

SolarReserve now has 246MW of PV projects worth US$800 million in South Africa and is looking to develop more. It sold a portion of its position in the 96MW Jasper project to Google earlier this year.

After its success with PV, with three projects entering into commercial operation in 2014, SolarReserve now wants a share of the pot of gold beneath the rainbow nation’s renewable programme with an RFP for a CSP project with storage. And the company has a long list of project proposals in other sunny countries.

"We just put in a bid in Chile for a tender of a CSP project," said Smith. "We have a bid going in March in Morocco with GDF Suez for a 100MW CSP project.

"Most of the markets we’re active in we’re doing PV and CSP. In some of them we’re focusing a lot of our energy on the mining sector – in Australia, South Africa, Chile. With a lot of those applications, we’re looking at combining CSP and PV into one project to provide 24 hour a day application for the mining sector, which is largely diesel oil based.

"So it’s pretty easy to beat the pricing if they are off grid.

[For] mining companies in Chile, power prices are pretty high; they don’t have access to the price of gas we have here in the US." 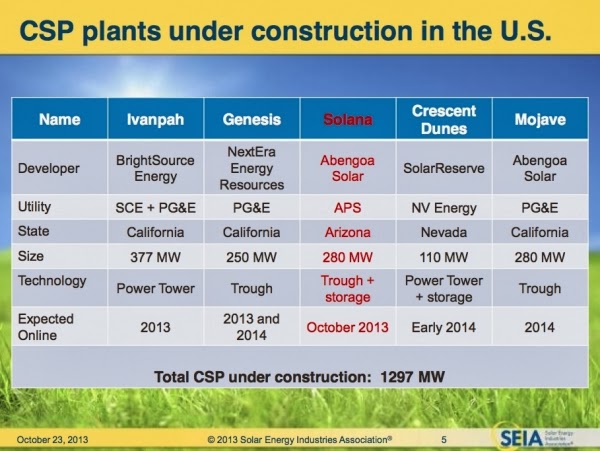 Even though Smith would not share any kilowatt-hour numbers with me (of course) SolarReserve is still making some CSP projects pencil out in the US – for now. Its 150MW Rice Solar Energy in California looks like it will add more steam to the US$1.8 billion of projects currently under construction. The California Public Utilities Commission’s mandate for utilities to procure 1.325GW of energy storage by 2020 should also help.

"The utilities all want storage, the question is, are they willing to pay a little bit more for it?" he asked. "Whether they do that with large-scale projects or with a whole bunch of small projects remains to be seen but it will be a difficult task for the California utilities to meet that [without large-scale projects]."

But what about the other players in "the other solar" space?

Luis Garcia, business development director at Abengoa Solar, told a story at Solar Power International in October about how his wife was always asking why he had to justify CSP.

"I am justifying CSP because there are many challenges out there that seem to focus on one thing [ie price]," he said, adding that the company had reduced its capital costs versus generation output by 60%.

The CSP Alliance estimates that there could be around 5GW of CSP capacity by 2023 in the west on condition that policy supports the deployment of clean energy sources and the extension of the 30% Investment Tax Credit past 2016, and/or changes the eligibility from “placed in service” to “commence construction”.

Electricity demand in the western United States is forecast to be 1,000,000GWh by 2022, an 11% increase from 2012, Garcia pointed out. That demand growth will also occur at the same time that a large number of existing power plants are scheduled to retire.

But only scale can bring the benefits of cost reduction to a more competitive 9c/KWh. You have to assume that it is nowhere near that because people in CSP stopped talking about it three years ago or more.

Katherine Gensler, director of government affairs at the Solar Energy Industries Association, asked not to be quoted by the press – only the second time in three years I had encountered a media ban in the US.

But I still think it’s safe to report, without her vice-president losing his job, that SEIA is still working hard to lower the cliff for CSP past 2016.

Funding has all but finished through the Department of Energy’s 1705 loan guarantee programme that helped finance large CSP projects such as US$1.5 billion for the US$2 billion Ivanpah plant and US$737 million for SolarReserve’s US$997 million Crescent Dunes project.

But the DoE has not taken its foot off the pedal to reduce costs and improve technology. DoE-funded CSP research includes high-efficiency thermal energy storage systems; high operating temperature liquid metal heat transfer fluids and low-cost, lightweight solar concentrators and low-cost heliostat development. DoE has built up 10 years of infrastructure in CSP, including a recent US$8 million award to help utilities forecast and integrate solar that may help value CSP based on more than cost alone and reduce soft costs like interconnection.

But as the focus for CSP shifts to international markets, there is hope that it will return to the US after its world tour that proves out a value proposition with storage.

As Garcia summed up: "If the CSP market doesn’t happen here in the US it will happen somewhere else and it will be truly really bad for the US to lose its leading position in the CSP market."