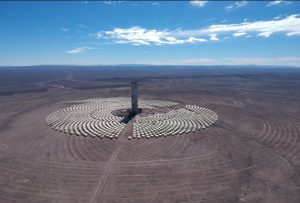 The PPA enters into force in July 2020 and will run for five years, the project company Cerro Dominador said Tuesday, adding that it won the contract in Copec’s tender.

The deal will enable Copec to cover 50% of its consumption needs, which includes 72 service stations, almost all of the company’s electric vehicle (EV) charging network and eight factories across several regions in Chile.

Cerro Dominador consists of a 100-MW PV component, in commercial operation since February 2018, 110 MW of CSP and 17.5 hours of storage in molten salts.

On November 12, a fire broke out in the upper section of the CSP tower, leaving behind significant material damage. After several hours, the situation was brought under control.

The Cerro Dominador company then said that construction would resume as soon as the circumstances permitted. Three days later, the last of the project’s 10,600 heliostats was installed at the solar field.