Megalim Solar Power hosted a Cornerstone Ceremony in the southern Negev desert region of Israel to celebrate progress on the Ashalim solar project, one of the largest of its kind in the world. Megalim is a Build, Operate, Transfer (B.O.T.) concession company owned by Noy Fund (49.9%), BrightSource (25.05%), and Alstom (25.05%). The 121 MW Ashalim Plot-B solar-thermal project is expected to supply 320 GWh of electricity annually into Israel’s grid when it is completed in 2017. The project costs are in excess of 3 billion ILS, with 80% of the funding provided by an Israeli banking syndicate led by Bank Hapoalim and by the European Investment Bank.

The Ashalim Plot B power facility is part of the Ashalim solar complex, which includes two solar-thermal projects (Ashalim Plot B and one other) and one photovoltaic projects. In total, these facilities at Ashalim are expected to produce nearly 300 MW of power, about 2% of Israel’s electricity production capacity. They will support the country’s commitment to reach 10% of the country’s electricity production from renewable sources by 2020. 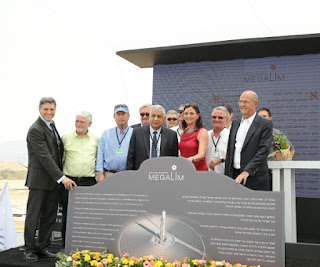 Megalim’s Ashalim Plot B plant is being constructed by a consortium under the leadership of Alstom, a French-based global leader in power generation, and will operate with BrightSource’s innovative solar tower technology, developed to be a source of stable, reliable and responsible renewable energy, in comparison to other renewable energy sources available in the market. Distinguishing characteristics of the facility include the 240-meter solar tower standing at the center of a 3.15 square kilometer field covered by over 50,000 sun-tracking heliostats with a cumulative surface area of over 1 million square meters.

The event was attended by nearly 300 guests, including senior public officials and officers of Megalim, its partners and the company’s board of directors. Speakers at the event included Minister of National Infrastructure, Energy and Water Resources, Dr. Yuval Steinitz; the Chairman & CEO of Paris-based Alstom Group, Patrick Kron; Megalim Chairman Pinchas (Pini) Cohen, the head of the Ramat Negev Regional Council, Shmuel Rifman; CEO of Megalim, Eran Gartner; Executive Vice President of Engineering and Operations for BrightSource Energy, Israel Kroizer; President of Alstom (Israel), Nissim Zvili; Chairwoman of the Public Utility Authority, Orit Farkash-Hacohen; Deputy Accountant General, Yariv Nechama; and French Ambassador, Patrick Maisonnave. Although he could not join in person, the former President of the State of Israel, Mr. Shimon Peres, shared his support for the project in a pre-recorded video message.

Beyond the clean energy objectives, the Ashalim Plot B facility will also satisfy the State’s declared objective of bringing economic activity to the Negev region, employing over 1,000 engineers, technicians, construction workers and support services. During the 25 years of planned operation Megalim, through its Operations & Maintenance Contractor, will permanently employ 45 skilled staff members.

Pinchas (Pini) Cohen, Chairman of Megalim and Chairman of the Noy Fund, stated: “As Chairman of Megalim, I have witnessed the impressive international talent that the partners in this project have assembled.  Ashalim Plot B is just the beginning of what will become a technological and commercial success story in the Negev.  We have recently launched exploratory discussions with the State on a significant expansion of the project to include storage and extend the plant’s operating hours into the evening peak, thereby enhancing the contribution of clean energy to the national grid and improving the competitive position of our plant.”

Eran Gartner, CEO of Megalim, said during the ceremony that, “This landmark project brings with it occupational and technology opportunities to the Negev region. My company and our partners have a clear commitment to deepen our engagement with local residents and authorities – some of whom we welcome in our tent today! The project has touched my own life – allowing me to return to Israel with my family after many years working abroad – and I am determined that the impact on others will be equally favorable”.

Israel Kroizer, Executive Vice President of Engineering and Operations for BrightSource Energy:
"This is a unique and important project from a technological and other perspectives.  From 2018 onwards, Megalim and the Ashalim Plot B project will deliver a real contribution to the Israel’s diversitfication and de-carbonization of its energy sector. The Megalim solar plant borrows heavily from, and further enhances the technology which we built and which is proving itself daily in California’s Ivanpah Solar-Thermal Electricity Generating System.  In short, Ashalim represents a giant leap into the future along BrightSource’s technological path".

Patrick Kron, Chairman & CEO of Alstom: “This project illustrates Alstom’s commitment to contribute to achieve a sophisticated, environmentally-friendly and efficient infrastructure that forms the backbone of the State of Israel’s dynamic economy and culture. The Group’s involvement in Israel already includes the Tzafit combined-cycle gas turbine facility, the Gilboa and Kochav HaYarden Pump Storage Hydro plants and the Jerusalem Light Rail system. Alstom and Israel benefit in equal measure from our deep and long-standing partnership to develop and supply state-of-the-art infrastructure solutions to answer the world’s economic and environmental challenges. Solar-thermal power, in cooperation with the industry leader BrightSource Energy, is a natural extension of Alstom’s Renewable Power portfolio".

The future power plant is considered as Israel’s flagship in the field of solar energy, and will ultimately have an output of 121 megawatts, one of the largest of its kind in the world. Construction completion is expected in late 2017. The plant will supply electricity to about 120,000 households under a power purchase agreement for 25 years with the Israel Electric Corporation. About 50,000 computer-controlled heliostats (mirrors), at the size of over 20 square meters each, will be installed over an area of more than 3 square kilometers, and will follow the sun in two axes while concentrating sunlight onto a boiler atop a 240-meter tower which will produce high temperature and high pressure steam to feed a steam turbine to generate electricity.

Alstom is a global leader in the world of power generation, power transmission and rail infrastructure and sets the benchmark for innovative and environmentally friendly technologies. Alstom builds the fastest train and the highest capacity automated metro in the world, provides turnkey integrated power plant solutions and associated services for a wide variety of energy sources, including hydro, nuclear, gas, coal and wind, and it offers a wide range of solutions for power transmission, with a focus on smart grids. The Group employs 88,000 people in around 100 countries. For more information about the company, please visit www.alstom.com.

Noy Fund established and managed by the partners Pinchas (Pini) Cohen, Gil-Ad Boshwitz and Ran Shelach. The fund was founded in mid-2011 to satisfy the growing demand among institutional investors for investment in energy and infrastructure, including renewable energy, traditional energy, and infrastructure and so on. These investments represent an attractive channel to those entities seeking solutions to long-term risk investments – with an adequate return. As of today – Israel’s largest infrastructure fund. For more information about the company, please visit www.noyfund.co.il.