Nur Energie Ltd expects to launch construction at the turn of the year of a 50-MW concentrated solar power (CSP) park in Greece, a project in which it is partnering with Motor Oil Hellas (FRA:MHZ).

The project, to use tower technology and molten salt storage, is currently at the latest stages of development, Nur Energie told Renewables Now.

The European Investment Bank (EIB) is considering supporting the scheme with a loan of an unspecified amount. According to information released on the bank’s website on Monday, the loan was under appraisal as of March 15, 2018. 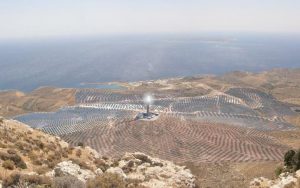 Nur and Greek oil and energy firm Motor Oil Hellas have formed a 50/50 joint venture to be in charge of the CSP project. The solar park is to be built on the island of Crete, southern Greece.