With this milestone achieved, the CSP (Concentrated Solar Power) project has now passed the necessary test to begin full commercial operation under its 25-year Power Purchase Agreement (PPA) with NV Energy to supply power well into the night for Las Vegas and other parts of Nevada. 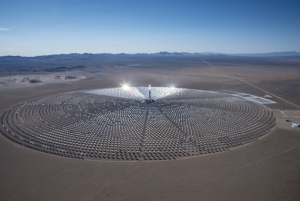 “We are meeting 100% of our requirements so far. The technology has been fully proven,” said Smith. “There’s additional testing that our EPC; ACS Cobra has to do on the balance of the plant and once that is complete in the next few weeks, we start to ramp up our annual output.”

Under the rollout plan with NV Energy, Crescent Dunes will now begin its official ramp-up over the coming year, with generation increasing gradually each month.

“The PPA gives us a year to ramp up. There is that flexibility because it recognizes that this is a completely new technology at this scale. However, based on the successful test results to date, we believe the ramp-up period will take less than the official timeframe.”

Crescent Dunes completed synchronization with the grid in October. Then, fittingly, the first 24-hr solar tower in the US generated its test electricity at 11 o’clock at night.

Oddly, for CSP, the EIA posts a tally not just of output in MWh, but also of solar “fuel” input in BTUs (British Thermal Units).

“They care about BTUs because historically fossil fuel costs are the biggest part of a conventional power plant,” Smith explained, while pointing out the silliness of counting up BTUs in a free fuel like solar.

With his 20 years of engineering experience with conventional thermal power, he finds complaints about solar’s supposed low efficiency amusing. If efficiency is generation output divided by fuel burned, solar is the winner with “infinite” efficiency, as its generation has a fuel input of zero.

The EIA database shows Crescent Dunes first generated 1,831 MWh in November. This represents only several days generation at the end of November, Smith explained. Then the contractor took the plant down again to make some modifications.

ACS Cobra, a global leader in the engineering and construction of thermal solar plants, is a ⅓ investor as well as EPC contractor. The Spanish firm has taken an “unhurried approach” to getting the project right.

However, since SolarReserve’s contract doesn’t kick in till Cobra hands it over, SolarReserve has not been harmed by Cobra’s pace. “Most of the delay has not been due to technical issues, but to the remote location of the project and the fact that this was Cobra’s first major power project in the US,” he said.

Smith had confided in October that, in fact, they had actually been more or less continuously operating the salt system and receiver since January, when they devised the algorithm change to reduce standby solar flux, reducing avian mortality. At that time, he noted a near-nil avian mortality rate over that 11-month period.

A disincentive for premature operation announcements would have to be the astonishingly antagonistic coverage that dogged the first power tower project in the US. Ivanpah grew up in the spotlight, with the media obsessively focused on every possible drawback, including even the idea that completely novel technology needs time to ramp up.

“It’s unbelievable what that project has had to endure and continues to,” said then-NRG spokesman Jeff Holland. “It’s like a lightning rod for news. Everything else is so quiet.”

Ivanpah was the first concentrated solar power tower to operate on direct steam, heating water to steam in the receiver and running the turbines on the steam, a simple and pure concept, as the heir to Luz.

The downside is you really can’t store steam, so the first power tower had no cushion in the form of storage. When that turned out to be difficult even for some daytime operation, BrightSource needed to increase the natural gas use, to “prop up” the system during fluctuating solar resource.

Crescent Dunes technology is completely different. Molten salt circulates throughout an integrated energy storage system. The salt “cools” to 500 degrees F (hardly cool: this is twice the boiling point of water) before being circulated back through the receiver again to be solar heated to 1,050°F again.

Storage in molten salt can stay hot for months, according to Smith. Normally, it isn’t left there, of course, but cycled daily as needed, tapped by night for generating electricity, and replenished by day by the sun.

Due to its innovative molten salt solar heat storage, SolarReserve’s US-designed technology can generate dispatchable solar electricity 24 hours a day, or on demand when a utility requests it during peak demand periods.

The cost to include the 1.1 GWh of thermal energy storage at Crescent Dunes is very low because it is integral to the firm’s patented molten salt receiver and storage design.

Batteries have appropriate uses — to run an EV or take a solar roof off the grid, for example. But adding a battery to an equivalent utility-scale PV project cannot come close in lifecycles or cost.

Compared to a lifetime of at least 30 years for a molten salt storage system (and no replacement costs), batteries aren’t close to competitive. With 10 hours daily of storage, the 110 MW Crescent Dunes project stores 1,100 MWh/day. SolarCity’s recent utility-scale battery in Hawaii stores only 50 MWh/day.

“It is shortsighted to only look at the immediate cost, and not really on the value that you can give to the energy system, the role that CSP can play to backup, and in combination with PV and wind add up to a really very high share of renewables, because it can provide power on demand when other fluctuating renewables can’t do it,” said Christof Richter, Executive Secretary of SolarPACES.

To fully de-carbonize the grid, we need PV for days and CSP for nights.

For now, CSP is cheaper than natural gas only internationally, where the fuel costs up to $10 per mmBtu or higher, not $2 like in the US.

Next, for example, in South Africa, SolarReserve is breaking ground on Redstone this year, and bidding three additional 150 MW projects in the current Round 4.5, and has a permitted 260 MW CSP/PV combo in Chile, Copiapo.

But the recent solar ITC extension was gained in return for allowing the fossil fuel industry to export oil and gas. And shipping natural gas overseas will likely raise its price back home, helping to make the case for CSP instead.

Smith confirmed that CSP with storage is technically able to run as a peaker plant, since it can start up, on demand, in about the same time — about 20 minutes or less. As spinning reserves increasingly take over the first seconds to half-hour required, “peaker plants are utilized both as day ahead and within day,” he said. “You get some day ahead warning, but within a day you might only get three hours’ notice or less.”

He is not enthusiastic about operating CSP as a peaker plant, however, as peakers might only be deployed a few hours a day, or a few days a month; dramatically lowering their capacity factor.

“And then you have a revenue problem. You don’t want to just wait for somebody to call you. After all the sun is shining all day.”

So, a typical workday for Crescent Dunes will be a solid 12-hour shift, working for NV Energy from noon to midnight.
by Susan Kraemer