A concentrated solar power system may become operational already next year, as the agreement with the government of Cyprus was signed after all permits have been secured. Alfa Mediterranean is about to build the 50 MW concentrating solar power plant using Australian tech.

Following years of delays, Alfa Mediterranean Enterprises finally signed the contract with the government to build its CY CSPc EOS Green Energy project. The first concentrated solar power (CSP) plant of 50 MW in Cyprus will be installed in Alassa near Limassol. 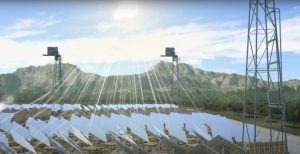 Minister of Agriculture, Rural Development and the Environment Kostas Kadis said the works are estimated at EUR 200 million. The plant will contribute significantly to the local economy and help the republic achieve its climate goals at no cost to the taxpayer, in his words.

The parliament only approved the EUR 60.2 million state guarantee after the investor secured a bank guarantee. Alfa Mediterranean, a property developer, is registered in Paphos.

The European Investment Bank is financing the concentrated solar power plant in Cyprus. It agreed to provide a EUR 36.1 million advance. The project is backed by the European Union’s NER300 program for innovative technologies in the sector.

As all permits have already been obtained, the construction can start immediately and the facility could become operational next year. It will become a model project, not only in Cyprus but also internationally, Kadis said.

He earlier asserted that the CSP endeavor will enable Cyprus to pay less for European carbon allowances. They are essentially a fine, the minister said.

“The technology we will use is the be-all and end-all to replace fossil fuels, reduce environmental pollution and protect people,” Neofytou stressed. He asked Kadis and the environment ministry for help in submitting proposals at future tenders across Europe.

Alfa Mediterranean has revealed plans to export electricity to continental Europe via the EuroAsia Interconnector. The undersea cable project is under development, with the goal to link the Israeli and European grids.

The building permit for Siemens’s HVDC (high voltage direct current) converter station in Cyprus has just been obtained. The interconnector of 1 GW, which should end in Greece, is valued at EUR 2.5 billion. The trilateral project is scheduled to be finished by December 2023. Another power link is under development within the EuroAfrica Interconnector.

CY CSPc EOS Green Energy is also a solar thermal project. The technology for storing heat is much cheaper than batteries.

The concentrated solar power plant in Cyprus will have three hundred solar thermal receivers (STRs). Rotating heliostats, essentially mirrors, will reflect sunlight toward the stations mounted on towers with graphite thermal storage, where the temperature can climb to as much as 800 degrees Celsius. The energy from the storage units can be used during the night.

Australian company Solastor developed the system, which features a superheated steam cycle. Heat is transferred to a turbine on the ground. The plant’s estimated annual production is 172 GWh, equivalent to the electricity consumption of 65,000 homes.

The project has been repeatedly postponed as Cyprus lacked a support system for renewables and its energy market is yet to be completed. Since power prices can’t be determined, financial institutions were reluctant to fund projects.