The Ivanpah Solar Electric Generating System in California (US), the world’s largest solar power plant, is a concentrating solar power (CSP) complex that uses more than 300,000 mirrors to generate electricity. On 19 May when a small fire shut down a generating tower the mainstream press jumped on the news with headlines announcing something similar to a meltdown at a nuclear power plant. This negative publicity is the perfect opportunity to explain what CSP is, its advantages as well as its challenges and the ultimate role it will play in our renewable energy future. 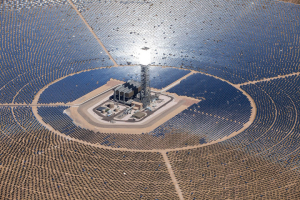 Concentrating solar energy is not a new concept—in fact it goes back at least 2300 hundred years when the ancient Greeks used mirrors to concentrate the sun’s rays. Today there are four types of CSP technology:  Parabolic trough and linear Fresnel systems focus sunlight onto a linear receiver. And dish/engine and power tower both focus sunlight to a point. All of these technologies involve converting sunlight into thermal energy for use in a heat-driven engine. A single CSP plant can generate enough power for 100,000 homes or more, making it a serious player of the utility-scale energy market.

After an investigation, NRG spokesperson David Knox reported that “the Ivanpah Unit 3 fire on May 19 was caused by the heliostats (mirrors) being locked in place in preparation for a maintenance activity (maintenance mode) causing the solar flux to briefly move over a portion of the boiler tower. The mirrors were unlocked and moved to remove the solar flux from the tower. We have put in place new safeguards that will prevent this from happening again.” The mirrors are designed to focus sunlight on boilers at the top of three 459-foot power towers, and those boilers create steam that drives turbines, which produce electricity.

Heliostats at Ivanpah. Photo by Gilles Mingasson/Getty Images for Bechtel

Knox added that, “The damage to Unit 3 was primarily limited to the aluminum covering of the insulation around pipes, as well as wiring and some valves which can be repaired relatively easily. We anticipate having the unit back online within three weeks.” Knox recently informed Solar Novus that the unit is back online and that all three are now operating.

Details on the plant

Ivanpah is a 392 megawatt (MW) CSP power tower plant that sits on approximately 3500 acres of land in California, just miles from the Nevada border. It was constructed in three phases between 2010 and 2013 and created more than 2600 jobs for construction workers and support staff. It uses BrightSource Energy’s LPT solar thermal technology that uses 173,500 heliostates, each with two mirrors that focus the power of the sun on the boilers at the top of three towers.  The electricity generated is enough to serve more than 140,000 homes in California during peak hours of the day. Output of the plant will reduce carbon dioxide emissions by more than 400,000 tons a year. Customers for the electricity include PG&E and Southern California Edison. Partners include NRG, Google, Bechtel Corporation and the Department of Energy.

The future of CSP

There are currently more than 90 concentrating solar power plants successfully generating utility-scale energy around the world, proving the viability and safety of the technology. (See “Concentrating Solar Power Projects with Operational Plants” )  Nearly 20 plants are under construction and 10 currently in development.

Dubai is currently operating a CSP plant, the second phase of which will make it the largest plant in the world. At a planned 5000MW by 2030, the Ivanpah plant will pale in comparison. In Spain the market for CSP was driven by a strong FiT program, and now the country has 50 operating CSP plants, predominantly using parabolic trough technology.

According to NREL’s “On the Path to SunShot: Advancing Concentrating Solar Power Technology, Performance, and Dispatchability,” Spain is the only country where CSP is “visible” in its national energy statistics, with nearly 2% of its annual electricity coming from CSP plans. Other strong markets for CSP include the Middle East and North Africa (MENA), South Africa, Chile, Australia, China and India. CSP is certainly not without its challenges, but CSP with thermal energy storage (CSP-TES) is highly dispatchable and offers many benefits to the grid, not the least of which is its ability to ramp rapidly as well as provide frim capacity, which is the ability to provide power when it is needed most. This is even more important as renewables such as photovoltaics and wind are added to the grid—both of which are variable. As fossil fuel generating technologies are taken out of use, a combination of an “all of the above” approach with renewables—including CSP-TES—will ensure system reliability while meeting peak demand.