«We are pleased to have worked together with SolarReserve on the Crescent Dunes Solar Energy Project, which now generates clean renewable electricity to power 75,000 homes with zero emissions. The project fulfills Delta’s long-standing mission to provide innovative, clean, and energy-efficient solutions for a better tomorrow,» said M.S. Huang, president of Delta Products Corporation. «It’s a milestone for Delta in developing total solutions. This successful case uses Delta’s solar tracking automation systems that combine a series of Delta’s advanced technologies.» 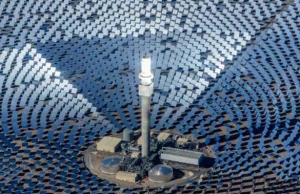 SolarReserve’s 110 megawatt Crescent Dunes Solar Energy Project located in Nevada uses 10,347 billboard-sized tracking mirrors called heliostats, each with an on-board Delta solar tracking automation system, to precisely reflect and concentrate sunlight onto a large 100-foot receiver atop a 540-foot tower. Within the receiver, molten salt flows through piping and absorbs the heat from the concentrated sunlight. The collected sun’s thermal energy heats the molten salt to over 1,050°F (566°C). After passing through the receiver, the molten salt flows down the piping inside the tower and into a thermal storage tank, where the energy is reserved as high-temperature molten salt until electricity is needed. The tank holds enough in storage to dispatch up to ten hours of electricity at nameplate capacity. When electricity is needed, even when the sun is not shining, the hot molten salt is used to generate high-quality superheated steam to drive a standard steam turbine.

SolarReserve is a leading global developer of utility-scale solar power projects, which include electricity generation by solar thermal energy with energy storage, as well as photovoltaic panels. The company has more than $1.8 billion of projects in operation worldwide, with development and long-term power contracts for 482 megawatts of solar projects representing $2.8 billion of project capital. Since the company’s formation in early 2008, SolarReserve’s experienced team has assembled a pipeline of 8 gigawatts across the world’s most attractive, high growth renewable energy markets. SolarReserve is headquartered in California and maintains a global presence with seven international offices to support widespread project development activities across more than 20 countries.