Denmark has put itself on the CSP map, inaugurating a combined heat and power (CHP) plant with a biomass boiler and 16.6 MW of concentrated solar power capacity.

The system is the first CHP plant of any type in Denmark, and it is the first in the world to integrate CSP and biomass with an Organic Rankine Cycle (ORC). The solar-thermal system based on CSP technology has been producing heat since the end of 2016, but with the ORC and biomass units now online, it is ready to contribute to the electricity grid. 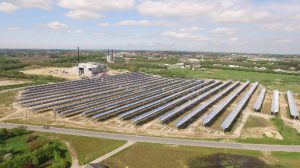 The CSP technology consists of 40 rows of 125m parabolic troughs. Aalborg CSP developed the 26,929m2 CSP portion of the project, and the entire project was support by the Danish Government’s Energy Technology Development and Demonstration Program.

Aalborg CSP has long been pushing the potential for CSP to be used throughout Europe. Although CSP is known for its use in sunny desert areas like Spain, the western US, and the Middle East and North Africa, Aalborg CSP says it has potential in northern Europe when integrated with other technologies.

According to Aalborg CSP, markets with well-established district heating infrastructure or an existing base of ORC plants – such as Germany, Austria and Italy – can leverage the flexibility of CSP for combined heat and power generation. It says that while the prices of different types of fuel fluctuate, concentrated solar energy proves to be a stable and efficient renewable alternative in Europe.