The Concentrated Solar Power plants that began operating early last year in the deserts of Riverside and San Bernardino counties are becoming more productive with practice.

In fact, two of the plants, the Desert Sunlight and Genesis projects in eastern Riverside County, produced more electricity than expected during a one-year period that ended June 30, according to an analysis of the most recent plant-production data made available by the U.S. Energy Information Administration.

Meanwhile, the Ivanpah plant near the Nevada boarder in northeastern San Bernardino County, is falling short of that goal.

That Concentrated Solar Power plant, which uses 346,000 mirrors to focus heat onto boilers mounted on top of three steel towers, produced only 59 percent of its annual power goal between July 1, 2014, and June 30.

Ivanpah is supposed to generate 940,000 megawatt hours of electricity a year, enough to power about 140,000 California homes. The U.S. Department of Energy provided the project with $1.6 billion in loan guarantees on the expectation that the plant would meet that goal. 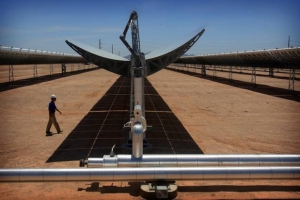 Still, Ivanpah operators say they anticipated the delay in production and are pleased with the plant’s performance, noting that solar-tower plants are complicated to operate.

During the first six months of this year, the plant produced almost twice as much as it did during its first half year of operation, which started in December of 2013, they said.

The numbers also show that this plant is on track to reach its production capacity within four years – as was planned by the developers, said David Knox, a spokesman for NRG Energy, which operates the plant.

“Ivanpah is not only a new plant, but the first of its kind at this scale,” Knox said. “A performance learning curve has always been planned since the project’s earliest stages.”

Running the plant is no simple task, he said.

Plant operators must constantly adjust the angles of thousands of mirrors as the sun rises and falls, Knox said.

The boiler units on the 400-foot-plus towers also can’t get too hot or cold to operate at optimal levels. This means the mirrors need to be directed toward or away from the towers, depending on the circumstances, he said.

“The team is getting much better at these operations every day, and they have to change its operations under different conditions,” Knox said. “It is a complicated dance, if you will.”

Robert J. Michaels, a Cal State Fullerton economics professor with expertise in energy markets, said he is not the surprised that the plant is not meeting its production goal after a year and a half of operations.

“The Ivanpah project is basically an experiment,” Michaels said. “Why they came up with the four-year figure (to reach production goals) is a mystery to me. And if they do get it working right, it doesn’t mean it is a good investment.”

Loans needed to build several big solar projects were backed by taxpayers through loan guarantees provided by the U.S. Department of Energy. Here are some of the amounts of the loans guaranteed by the government.