Thermochemical solar fuel manufacturing would be an energy industry with a life of centuries, rather than decades. The feedstock of sunlight, carbon dioxide and water is essentially unlimited.

Researchers at the Department of Mechanical and Process Engineering at ETH Zurich, Switzerland, have concentrated 3,000 «suns» of solar thermal energy into a solar reactor at 1,500°C for thermochemical splitting of H2O and CO2 into hydrogen and carbon monoxide (syngas), the precursor to kerosene and other liquid fuels.

The paper details the successful solar-driven thermochemical splitting of CO2 into separate streams of CO and O2 with 100% selectivity, 83% molar conversion, and 5.25% solar-to-fuel energy efficiency.

The scientists performed 295 consecutive cycles in a 4 kW solar reactor during the SOLAR-JET project, yielding 700 standard liters of syngas. Once the researchers thermochemically split the water and carbon dioxide into carbon monoxide and hydrogen (syngas), they sent the syngas to Shell Global Solutions in Amsterdam, where the Fischer-Tropsch process was applied to refine it into kerosene, the jet fuel used by airplanes.

The solar thermochemical kerosene can be certified for commercial aviation by minor addendum to the existing D7566 specification for synthesized hydrocarbons to allow for kerosene produced by solar energy. 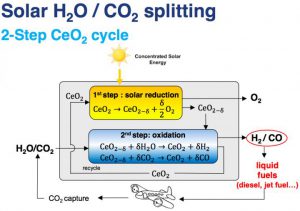 Diagram of the chemical process for concentrated solar splitting of H2O / CO2 from Philipp Furler’s presentation at the 23rd SolarPACES Annual Conference.

Traditionally syngas was derived from natural gas or coal, but there has been much research into solar fuels from the solar thermochemical splitting of water and carbon dioxide.

The SOLAR-JET team is the first to have demonstrated the entire process using solar heat, to split the H2O and CO2 and to store, compress, and to then process the resulting gas via the Fischer-Tropsch method into jet fuel.

H2O and CO2 can supply the feedstock for all the liquid fuels currently used for transportation, which are just various molecular recombinations of hydrogen and carbon.

Industrial-scale jet fuel production from solar thermochemical splitting would be disruptive for the fossil fuel industry. Oil and natural gas would no longer be needed as the feedstock for transportation fuel production.

Nevertheless, Furler believes that the fossil energy industry will have an interest in substituting a solar process for jet fuel. «I am very convinced that it will be the case that conventional fuels will be punished by CO2 taxes in the future,» he said. «This will be the main driver. And the big oil and gas companies are afraid of this situation. We believe that this is a future business.»

Carbon-neutral air travel is one of the biggest missing links in a carbon-constrained future.

Solar jet fuel could become a major industrial growth opportunity in regions with a good solar resource like Australia, China, Chile, the US Southwest and the Middle East and North Africa Region (MENA).

The concentrated solar thermochemical process provides the most promising technology for splitting water and carbon-dioxide molecules, scientists say, because of its direct conversion of high-temperature solar process heat into chemical energy.

«If you compare our approach to for example PV plus electrolysis then we have the potential to become more efficient and cheaper» said Furler.

A solar thermochemical reactor for splitting of H2O and CO2 requires temperatures up to 1500°C and therefore much greater solar flux than today’s CSP for electricity generation which operates at only up to 560°C. So solar reactors for thermochemistry use thousands rather than hundreds of suns, to get to these temperatures.

«We heat up the reactor to very high temperatures – for this experiment we used 1500°C and 1000°C. The high temperatures are required to drive the chemical reactions to split the H2O and CO2 into the mixture of hydrogen and carbon monoxide, with a separate stream of pure oxygen by-product,» Furler explained.

The key component of the splitting process is a high-temperature solar reactor containing a reticulated porous ceramic (RPC) structure made of ceria (CeO2) which facilitates molecule splitting.

«Ceria is the state-of-the-art material,» Furler said. «It has the ability to release a certain amount of its oxygen and then in the reduced state it has the capability of splitting water and CO2.»

«In the first step, at 1500°C, we release a fraction of the oxygen contained in the material, thereby a pure stream of oxygen leaves the reactor as a valuable by-product,» he explained.

«The second step takes place at a lower temperature, about 1000°C, and H2O and CO2 are introduced. The ceria wants to uptake the oxygen which it previously held. Since there is no oxygen it needs to split H2O and CO2 in order to access its oxygen, so it splits the water and carbon-dioxide into hydrogen, carbon-monoxide and oxygen to access the oxygen. Now it uptakes the oxygen, and thereby it resumes its initial state, and the product is a mixture of hydrogen and carbon monoxide can be extracted from the reactor.»

The CO2 for this process is envisioned to be extracted from air, Furler said.

«Our long-term vision, and what we are following is that we will be extracting the CO2 from the atmosphere. This way, we are able to close the carbon-cycle and to produce CO2-neutral fuels. The technology is still expensive but commercially available, for example from the Swiss startup Climeworks, another ETH spinoff.»

Solar jet fuel would be carbon-neutral assuming the CO22 is captured from atmospheric air (or comes from biomass) because the CO2 used in the fuel production is equivalent to the CO2 released in combustion.

Efficiency improvements and next steps

The researchers have boosted the efficiency of the solar process from 2 percent to 5 percent by moving to vacuum extraction on the 4 kW reactor. Their two-step solar thermochemical conversion with ceria shows a long-term efficiency potential of beyond 30 percent.

«This was a learning over I would say a couple of years,» Furler said. «We improved the material morphology in this respect, and achieved the critical results. Then we optimized the reactor prototypes with flow modeling and numerical simulations and the resulting new reactor generation is what we showed in this research paper. We operated the reactor on a vacuum to enhance the extraction of oxygen. This showed to be much more efficient than flowing an inert gas to carry out the oxygen. This is mainly what boosted the efficiency from about two to about 5 percent.»

The next goal is to raise the efficiency to 15 percent, by incorporating an advanced system to recover sensible heat of the process.

Having demonstrated the technical feasibility of solar thermochemical jet fuel production under operating conditions similar to industrial scale, the next step will be to get help in much more massive scaling up.

Ultimately, industrial-scale solar fuels production systems would be run using megawatt-scale reactor-systems on solar towers with heliostats (mirrors) concentrating suns on the receiver, similar to, but running at much higher temperatures than current commercial solar tower plants. Furler believes that the oil industry is best-suited to help with the such a scale up. «We need the support of people with the know how, and guys in the oil and gas industry have shown that they know how to massively scale up,» he said.

Furler hopes to get the oil industry involved in replacing the current industrial process where kerosene is made in large oil refineries by distilling it from oil. Once relevant CO2 taxation is imposed that process will become more expensive and less economically attractive.

«Currently they are doing it cheaper,» said Furler. «Typically you take oil and distillate. It is simply an oil-based product. It is much simpler, but it’s a fossil based process. You have massive CO2 emissions associated with it.»

According to the SOLAR-JET Project Coordinator at Bauhaus Luftfahrt, Dr. Andreas Sizmann, a solar reactor with a 1 square kilometer heliostat field could generate 20,000 litres of kerosene a day. This output from one solar fuels refinery could fly a large 300-body commercial airliner for about seven hours.

Furler has just founded the ETH spin-off Sunredox to commercialize the technology.

Thermochemical solar fuel manufacturing would have an industry life of centuries, rather than decades. The feedstock of sunlight, carbon dioxide and water is essentially unlimited.

«Oil is a limited resource; at some point you will run out,» he pointed out. «What we propose is another route to the same chemical, using solar energy.»