The Jemalong project with 6MWth (1.1MWe) near Forbes, in western NSW, will be the first in Australia to integrate storage into a stand-alone solar power station and provide electricity to the grid, on demand at night as well as day. And, Vast Solar CEO Andrew Want suggests, it will be able to do it for around the same cost of wind energy.

After hours of steady rain, there is not a ray of sunshine in sight and the mud is thick on the ground at the $20 million Jemalong pilot solar thermal plant near Forbes in central west New South Wales.

But in a way, the fact it is overcast helps to explain the importance of this technology, which enables both capture and storage of energy from the sun, according to James Fisher, chief technology officer of Vast Solar.

The engineer, who formerly worked in the fossil fuel industry and said he never thought renewables could compete with coal, now has a much sunnier outlook on the subject.

The Australian company has developed what it hopes will be a low-cost, high-efficiency Concentrated Solar Power (CSP) generation technology. 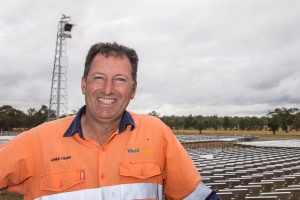 James Fisher, is all smiles as construction of the solar thermal pilot plant near Forbes, NSW nears completion.

The Jemalong pilot plant will be ready for commissioning in mid-January and is designed to prove the technology works.

Five modules of 700 mirrors — or heliostats — will concentrate the sun’s energy onto a receiver mounted on a 27-metre high tower.

Sodium will then be pumped through the receiver where it will be heated up to 565 degrees Celsius and stored in a tank.

When power is needed, the hot sodium will be put through a steam generator, similar to a big kettle, which will boil the water, generating steam and driving the turbine in the same way a coal-fired plant operates.

Photo: An aerial photograph of the 3,500 mirrors of the $20 million pilot solar thermal plant on a farming property near Forbes, NSW. The mirrors are arranged in five modules, each of which can be turned on and off as required. (Supplied: Vast Solar)

Mr Fisher said traditional solar or photovoltaic power production converted the sun’s energy directly into electricity which then had to be stored in expensive batteries.

He said the difference with CSP was that it captured the sun’s energy in heat which was cheaper and easier to store.

“So the big advantage with solar thermal is the storage. Our storage costs around $25 a kilowatt an hour, compared to lithium ion batteries which cost about $300 a kilowatt hour,” Mr Fisher said.

He said the system meant power production could happen whenever it was needed and until now, that role of maintaining a steady electricity grid had mainly been provided by coal power.

“We can run 24 hours a day and providing base load is really the key to solar thermal,” he said.

Photo: “They’re literally little robots,” James Fisher says about the 3,500 mirrors or heliostats which readjust themselves every 30 seconds as they track the sun. (ABC Central West: Melanie Pearce)

Potential for ‘massive’ money in regions

Mr Fisher said if the 1.1 megawatt Jemalong pilot proved the technology was viable for 30 years, billion dollar commercial plants would be built.

It could be very significant here in Australia but also, there are significant overseas opportunities for Vast where Australia could earn export dollars.

“This sort of technology will put massive amounts of money into regional Australia if it takes off,” he said.

Vast Solar has revealed plans for a 30 megawatt commercial plant — at a yet to be determined location — and Mr Fisher said the company had progressed well in attracting investment.

“But a problem is it’s big money to develop it. These plants you can only build in large scale, so a tiny plant will be $100 million and a good-sized plant will be $500 million,” Mr Fisher said.

The commissioning process at the Jemalong pilot will take four to six months and experts ranging from representatives of power utilities to academics from the Australian National University will be involved.

The project is also being closely watched by the Australian Government’s Renewable Energy Agency, Arena, which has committed $5 million.

“This is the next logical scale-up of their technology and then, assuming this is successful, Arena expects to support them in a far larger plant,” Mr Kay said.

“It could be very significant here in Australia but also, there are significant overseas opportunities for Vast where Australia could earn export dollars.”

Photo: Solar-heated sodium, at 565 degrees Celsius, is stored in the tank on the left. When electricity is needed, the hot sodium is used to power the steam generator on the right at the solar thermal pilot plant near Forbes. (ABC Central West: Melanie Pearce)

Mr Fisher said solar thermal had been the “poor cousin” of renewable energy and research and development in the field was about 20 years behind photovoltaic technology.

However, he is hopeful following the change in leadership within the Federal Government.

“Malcolm Turnbull’s government is being very proactive on this sort of thing and innovation, which is where I squarely sit,” Mr Fisher said.

“We’re excited that we’ve got a government that understands that.”

Mr Fisher said commercial solar thermal plants could be producing power at seven cents per kilowatt hour, which was cheaper than the most up-to-date coal-fired plants.

“I think we’ll look back in 50 years and think, ‘wow, what were we doing building coal mines to power a plant that has to run 24-hours a day when the sunshine’s free?'”

He said solar thermal technology had a bright future.

“Hopefully it will be Vast Solar that cracks it but someone will do it, there’s no question in my mind,” he said.