HE Saeed Mohammed Al Tayer, MD & CEO of Dubai Electricity and Water Authority (DEWA) received HE Awaidha Murshed Al Marar, Chairman of the Department of Energy and Member of the Executive Council of Abu Dhabi, at DEWA’s headquarters in Dubai. Al Marar was accompanied by HE Dr Saif Saleh Al Sayari, Director General of Abu Dhabi Water and Electricity Authority (ADWEA), and Mohammed bin Jarsh, MD of Abu Dhabi Water and Electricity Company (ADWEC). The visit built closer ties between DEWA and the Department of Energy, to identify DEWA’s world-class practices and experiences, and conduct benchmarking. DEWA continuously works to upgrade its services even further, to form a distinctive model to meet all the requirements for development in Dubai. DEWA also provides electricity and water services, in accordance with the highest international standards, in availability, reliability and efficiency to achieve the happiness of all customers and stakeholders. 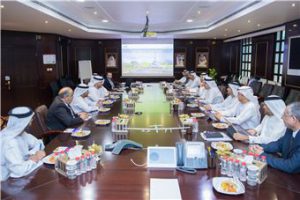 Al Tayer welcomed everyone and talked about establishing closer ties on energy and water, as well as improving efficiency and working as a team. This supports the directives of HH Sheikh Khalifa bin Zayed Al Nahyan, President of the UAE, HH Sheikh Mohammed bin Rashid Al Maktoum, Vice President and Prime Minister of the UAE and Ruler of Dubai, and HH Sheikh Mohammed bin Zayed Al Nahyan, Crown Prince of Abu Dhabi and Deputy Supreme Commander of the UAE Armed Forces, to promote the UAE’s regional and global leadership, and enhance the productivity and quality of services provided to customers.

During the meeting, Al Tayer reviewed DEWA’s programmes, plans, and projects, in electricity and water, which support the objectives of the UAE Centennial 2071, to secure a happy future and a better life for future generations, and raise the country’s status as the best country in the world. This supports the Dubai Plan 2021, to strengthen Dubai’s global competitive position, especially in renewable energy, sustainability and green economy, and provide the best government services.

Al Tayer explained the details of the Mohammed bin Rashid Al Maktoum Solar Park, the world’s largest single-site solar power project, with an overall investment of AED 50 billion and a production capacity of 5,000MW by 2030. When completed, the solar park will contribute to reducing over 6.5 million tonnes of carbon emissions a year, supporting Dubai’s goals of promoting sustainable development and green economy.

Al Tayer noted that the 13MW photovoltaic first phase became operational in 2013. The 200MW photovoltaic second phase of the solar park was launched in March 2017. The 800MW photovoltaic third phase will be operational by 2020. HH Sheikh Mohammed bin Rashid Al Maktoum also announced the 700MW AED14.2 billion fourth phase of the Mohammed bin Rashid Al Maktoum Solar Park. This is the largest single-site Concentrated Solar Power (CSP) project in the world, based on the IPP model. The project will have the world’s tallest solar tower, measuring 260 metres, and will be commissioned in stages, starting from Q4 of 2020.

“We are currently working to establish an R&D centre at the Mohammed bin Rashid Al Maktoum Solar Park, with a total investment of AED 500 million up to 2020. The work of the centre revolves around four main areas of operation, which include the production of electricity from solar power, smart grid integration, energy efficiency, and water. DEWA is also building an Innovation centre to develop the nation’s skills in energy, and promote competitiveness by using incubators to develop new renewable energy technologies,” said Al Tayer.

“DEWA has achieved very competitive results in its global benchmarking, surpassing the private sector and major European and American utilities in efficiency and reliability. It has been able to raise the efficiency of energy production, using the latest technologies and adopting technological innovations, and also surpassed European and American utilities by reducing losses from electricity transmission and distribution networks to 3.3% compared to 6-7% in the US and Europe, and water network losses were reduced to 8%, compared to 15% in North America, which is one of best results in the world. DEWA also achieved 3.28 customer minutes lost per year compared to 15 minutes in Europe. The UAE, represented by DEWA, has been ranked first in the Middle East and North Africa and fourth globally for the fourth consecutive year for getting electricity as per the World Bank’s Doing Business 2017 report,” added Al Tayer.

Al Marar stressed the importance of the visit to DEWA, which comes in the context of mutual visits with the institutions and departments working in energy in the UAE. The visit strengthened the bonds of mutual cooperation for public interest. Al Marar commended DEWA’s initiatives in environmental conservation, rationalisation of consumption, and upgrading its substations and distribution networks.

Al Marar noted that the development of the energy sector is a top priority for the UAE, which is leading regional and global efforts in clean and renewable energy diversification. This is due to the vision of HH Sheikh Khalifa bin Zayed Al Nahyan, President of the UAE, HH Sheikh Mohammed bin Rashid Al Maktoum, Vice President and Prime Minister of the UAE and Ruler of Dubai, and HH Sheikh Mohammed bin Zayed Al Nahyan, Crown Prince of Abu Dhabi, Deputy Supreme Commander of the UAE Armed Forces, and Chairman of the Executive Council of Abu Dhabi, and their support for creative and ambitious initiatives to achieve sustainability in the energy sector. Al Marar added that this vital sector receives great attention and care from our wise leadership, and therefore the continuation of development plans remains a strategic priority

At the end of the visit, Al Tayer, briefed delegation on DEWA’s new head office building, Al-Shera’a, which will be the tallest, largest, and smartest government Zero Energy Building (ZEB) in the world.