Dubai Electricity and Water Authority (DEWA), represented by its Research and Development (R&D) Centre, has been granted a patent for a system to measure atmospheric attenuation that results from different factors such as dust. This adds to DEWA’s record of achievements. The system identifies the best locations for solar towers and heliostats in Concentrated Solar Power (CSP) projects through meticulous calculations using a drone and an autonomous vehicle. The invention has been registered at the UK’s Intellectual Property Office under DEWA’s name. 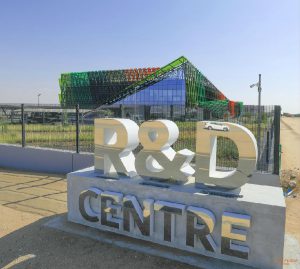 “In line with the vision and directives of His Highness Sheikh Mohammed bin Rashid Al Maktoum, Vice President and Prime Minister of the UAE and Ruler of Dubai, we are committed to providing a motivating environment that encourages creativity and innovation. This contributes to achieving the UAE Centennial 2071, which aims to make the UAE the world’s leading nation, and achieves the National Innovation Strategy to make the UAE one of the most innovative countries in the world, and the Dubai Innovation Strategy to make Dubai the most innovative city in the world. The invention that DEWA patented to measure atmospheric attenuation, contributes to enhancing the efficiency and effectiveness of CSP system. This underlines our commitment to the highest levels of leadership and excellence to enrich knowledge and contribute to the scientific community with specialised research to advance the clean and renewable energy sectors, thanks to the outstanding staff at DEWA, who have developed several innovations through research and working on obtaining other patents,” said HE Saeed Mohammed Al Tayer, MD & CEO of DEWA.

Waleed Salman, Executive Vice President of Business Development and Excellence at DEWA, said that the invention is a more efficient and effective alternative to current radiation measurements that use fixed installations on mountains closest to the station. In the case of Dubai, the nearest mountain top is 100 kilometres away, which makes information inaccurate. The patent also enhances the efficiency of heliostats by controlling their direction to maximise the benefit from solar radiation.

DEWA uses CSP in the 950 MW fourth phase of the Mohammed bin Rashid Al Maktoum Solar Park. This phase is the largest single-site investment project in the world that combines CSP and PV based on the IPP model. It will use 700MW of CSP; 600MW from a parabolic basin complex and 100MW from a solar tower; and 250MW from photovoltaic solar panels.  The fourth phase will feature the tallest solar tower in the world at 262.44 metres with the largest thermal storage capacity of 15 hours; allowing for energy availability round the clock.