DEWA intends to build the largest CSP project in the world

DEWA intends to build the largest CSP project in the world

HE Saeed Mohammed Al Tayer, MD & CEO of Dubai Electricity and Water Authority (DEWA), received a Finnish delegation headed by HE Kai Mykkänen, the Finnish Minister for Foreign Trade and Development. The meeting supports DEWA’s commitment to establish cooperation and joint efforts, and exchange expertise and insights with international organisations. The Minister is heading a delegation of Finnish companies working in renewable energy, energy efficiency, smart homes, and water to participate in Abu Dhabi Sustainability Week.

The meeting was attended by HE Riitta Swan, Ambassador of Finland to the UAE, Dr. Yousef Al Akraf, Executive Vice President of Business Support and Human Resources at DEWA, and Khawla Al Mehairi, Vice President of Marketing & Corporate Communications at DEWA.

During the meeting, Al Tayer emphasised that the UAE is keen on developing and enhancing bilateral relations with Finland, especially in advanced technologies, industry, knowledge, and other areas of mutual interest.
In the meeting, both sides discussed enhancing cooperation and exchanging best practices between DEWA and Finnish companies in renewable and clean energy, environmental sustainability, innovation, smart cities, and water. 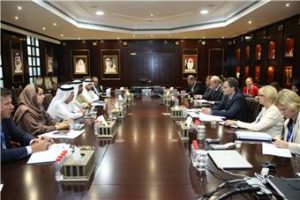 Al Tayer briefed the visiting delegation on the technical progress made by DEWA, pointing to the global achievements in reliability, availability and efficiency of the generation, transmission and distribution of electricity and water services. DEWA has achieved competitive results, surpassing leading European and American companies by reducing losses in power transmission and distribution networks to 3.3%, compared to 6-7% in Europe and the USA. Water network losses decreased to 8.2 %, compared to 15% in North America, achieving global results in reducing water losses. DEWA’s results are among the best internationally for customer minutes lost per year. DEWA’s figures reached 3.87 minutes, compared to 15 minutes recorded by leading utilities in the European Union. The UAE, represented by DEWA, has been ranked first in the Middle East and North Africa and fourth globally for the fourth consecutive year for getting electricity as per the World Bank’s Doing Business 2017 report.

Al Tayer highlighted DEWA’s key developmental projects and strategic initiatives that support the Dubai Clean Energy Strategy 2050, which was launched by HH Sheikh Mohammed bin Rashid Al Maktoum, Vice President and Prime Minister of the UAE and Ruler of Dubai, to diversify the energy mix so clean energy will generate 7% of Dubai’s total power output by 2020, 25% by 2030 and 75% by 2050.

Al Tayer also highlights DEWA’s strategic projects in Hatta, which include the first hydroelectric power station in the GCC to make use of the water stored in the mountains next to Al Hatta dam. The power station will be completed within five years and will produce 250MW. Other projects include installing photovoltaic panels on rooftops of buildings for Emiratis in Hatta through the Shams Dubai initiative, installing smart meters in the buildings and houses using the latest international systems, through the Smart Grid and Meters initiative, and establishing the infrastructure for electric vehicle charging stations through the Green Charger initiative.

Al Tayer discussed the smart grid that DEWA is building. DEWA’s Smart Grid is the first network in the world to cover all operations from generation, to transmission and distribution systems. This will significantly improve living standards in the Emirate. DEWA uses the latest SCADA systems, smart monitoring and control automation systems to provide electricity and water services to the highest standards of availability, efficiency and reliability.

Al Tayer also highlighted the 2,400MW Hassyan clean coal power project, and M-Station, the largest power production and desalination plant in the UAE, with a total capacity of 2,060MW of electricity and 140 MIGD. DEWA is currently expanding the station to add to the current capacity of the station to produce 2,760MW by 2018.

Al Tayer also talked about investments in projects that support the Demand-Side Strategy to improve energy efficiency in buildings. DEWA is currently working on retrofitting 30,000 existing buildings in Dubai through Etihad Energy Services Company (Etihad ESCO). This provides investment opportunities with a total cost of about AED 30 billion, while current saving is AED 82 billion of the pure total saving of AED 52 billion.

Mykkänen highlighted Finland’s work in renewable energy, the present energy mix in place to generate electricity, and the diversity of Finnish expertise and experience in the fields of energy efficiency and future technologies. Finnish companies expressed their interest to take part in DEWA’s clean and renewable energy projects. The Finish minister commended DEWA on its efforts to achieve the sustainable development of Dubai and reduce the carbon footprint to ensure a brighter future for generations to come.