This year’s SolarPACES Technology Award goes to a team of researchers from the DLR Institute of Solar Research and CSP Services. The measurement method they jointly developed calculates the solar flux density distribution on the receiver of solar tower power plants in real time. The measurement results show the intensity with which the concentrated solar radiation hits the surfaces of the receiver. Solar power plants can use the information to better align the heliostats, which increases the lifespan of the receiver and the efficiency of the power plant. How much concentrated solar radiation is arriving?

In a commercial solar tower power plant, tens of thousands of individual mirrors bundle the sunlight and reflect it onto a surface at the top of the solar tower. There a receiver picks up the radiation and converts it into heat. If the radiation hits the entire surface of the receiver with an evenly distributed intensity, the energy yield is highest. However, it can happen that the mirrors are aligned in such a way that so-called hotspots arise, for example. Such an uneven distribution of solar radiation causes accelerated aging of the receiver and leads to higher heat losses. In order to be able to optimally align the power plant’s heliostats, the power plant’s control center therefore not only needs information on the position of the sun and the expected solar radiation, but also on the radiation distribution on the receiver.

Conclusions can be drawn, for example, from temperature measurements using sensors or infrared cameras. However, these methods only determine the radiation distribution indirectly by looking at the heat development. The solar flux density, on the other hand, is a direct measure of the intensity with which the concentrated sunlight hits the receiver. Up to now, flux density measurements were only possible using so-called moving bars – an expensive and complex to install and at the same time error-prone system. It is therefore only used for smaller prototype measurements in test facilities. So far there has been no workable system for commercial power plants.

The new measuring system works without a moving bar, only with a digital camera and calculates the flux density on the basis of the raw image data. As a basis for the calculations, the reflective properties of the receiver are determined once when setting up the system.

A camera takes pictures of the surface of a solar receiver during solar operation. By applying various correction matrices and calibrating with a radiometer, the rectified raw image turns into an image of the solar flux density distribution in kW/m2. Image: DLR

In order to characterise the receiver of the Jülich solar tower, researchers irradiated it with a spotlight after sunset. Using a digital camera, they took pictures of the receiver one after the other from 16 different positions in the mirror field and were then able to determine its reflection properties. This data later serves as basis to correct the raw images. 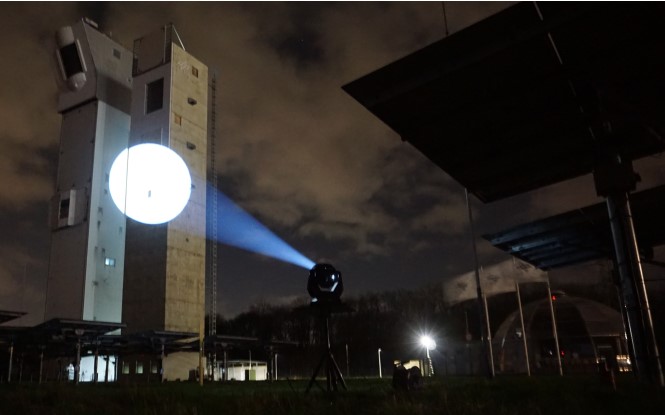 With a patented scanning process, the reflection properties of the receiver surface are determined at night. This is necessary just once for the installation of the system. These data will later be used to correct the raw images. Image: DLR

In connection with a radiometer, the recordings during solar operation can be converted into solar flux density distributions in a matter of seconds. This allows the power plant operator to determine in real time how much solar radiation is reaching the receiver. The system can be used for all types of receivers that have an external surface. Research group leader Marc Röger from the Institute of Solar Research: “From our point of view, the system is particularly interesting for new power plant projects that do not yet have a monitoring system or for power plants that want to replace their existing system, for example a thermography system. “

The real-time measurements do not interfere with the operation of the power plant. Further advantages of the system are the low investment and operating costs as well as the long service life of the system.

The development of the measuring system was funded by the: German Federal Ministry for the Environment, Nature Conservation and Nuclear Safety, the German Federal Ministry for Economic Affairs and Energy, the German State of North Rhine-Westphalia and SOLAR-ERA.NET with co-funding from the Spanish Center for the Development of Industrial Technology CDTI, the European Horizon2020 program and from DLR.