For CSP (Concentrating Solar Power) and PV (photovoltaic) solar to gain utilities’ favor, the utilities that would obtain power from them must accurately value them.

CSP Alliance Executive Director Tex Wilkins believes that if utilities and other load-serving entities (LSEs) saw the value in owning CSP plants with storage, it would grow competition and economies of scale in CSP and its supply chain and drive prices down, just as such competition did in photovoltaic (PV) solar and wind.

For CSP and PV solar to gain utilities’ favor, the utilities that would obtain power from them must accurately value them.

The report An Evaluation of Solar Valuation Methods Used in Utility Planning and Procurement Processes, from LBNL researchers Andrew Mills and Ryan Wiser, looks at “a recent sample of U.S. LSE planning studies and procurement processes to identify how current practices reflect the drivers of solar’s economic value.” 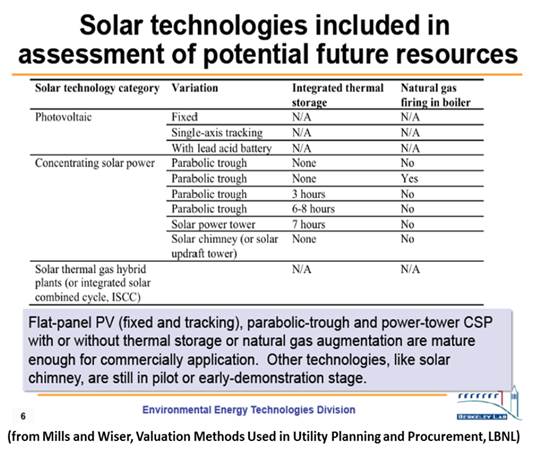 Like other generation sources, solar PV and CSP with and without thermal storage have energy value and capacity value and getting them into utilities’ power mixes incurs integration costs.

Solar’s energy value is “the reduction in the present value of the revenue requirement (PVRR) from avoiding variable fuel and operational costs from conventional power plants in portfolios with solar.”

Utilities’ studies calculate the energy value of solar by analyzing “the ability of solar to reduce variable costs with detailed production cost models.” These models constitute “the right approach,” the researchers found, but the often crude approaches used to design the resource portfolios evaluated in the detailed models need to follow the models’ more careful methods.

Where there is ample sun at peak demand periods, capacity value is a major factor in solar’s economic value. Capacity value is “the avoided costs from reducing the need to build other capacity resources, often combustion turbines (CTs), to meet peak demand reliably.” That reliability requires enough capacity “to meet the peak load plus a planning reserve margin.” 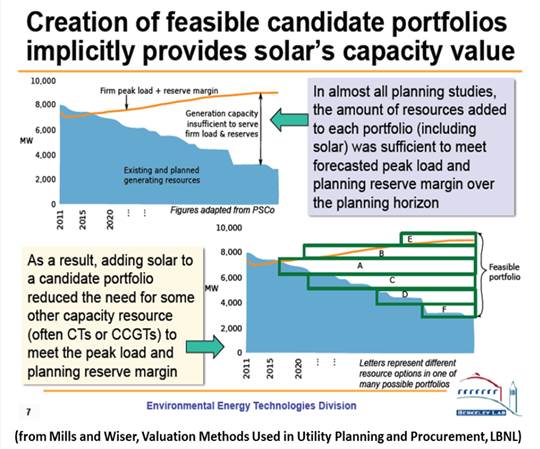 It is what the LSE expects to avoid from other generation sources by adding solar to its portfolio. If an LSE gives solar a capacity credit of 50 percent, a 100-megawatt PV plant “can contribute roughly the same toward meeting peak load and the planning reserve margin as a 50-megawatt CT." Capacity credit varies with technology, project configuration, and the time of the LSE’s peak demand.

Mills and Wiser found that “many LSEs have a framework to capture and evaluate solar’s value, but approaches varied widely.” Few of the LSEs’ frameworks were based on “detailed analysis of key factors such as capacity credits, integration costs, and tradeoffs between distributed and utility-scale PV.”

The researchers essentially found Tex Wilkins’ point to be accurate. “Factors like the dispatchability benefits of CSP plants with thermal storage appear to be quantified only in terms of a higher capacity credit versus other solar technologies. As the cost of building solar decreases, it will become increasingly important to refine estimates of these factors for all solar technologies, refine study methodologies, and communicate those methodologies to developers and generating equipment manufacturers.” 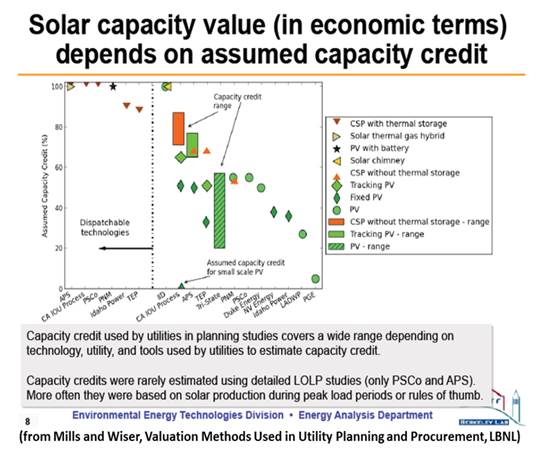 Mills and Wiser also found a “wide range of integration cost estimates” but a “scarcity of detailed analysis of solar integration costs.” LSEs, they concluded, need better and more detailed analyses to justify the assumptions they make in planning studies and procurement decisions. There are studies of the costs of integration operations and of the impacts of hour-to-hour variability, but too many LSEs rely on “rules of thumb, results from studies in other regions, or results from wind integration studies.”

Such analysis should include, Mills and Wiser noted, the costs of new transmission and distribution, but also the benefits to the grid of CSP with thermal storage or natural gas augmentation.

Asked to speculate on why utilities lack definitive valuations, Mills observed that where regulators and stakeholders drive the planning and procurement process, the details are more carefully analyzed. 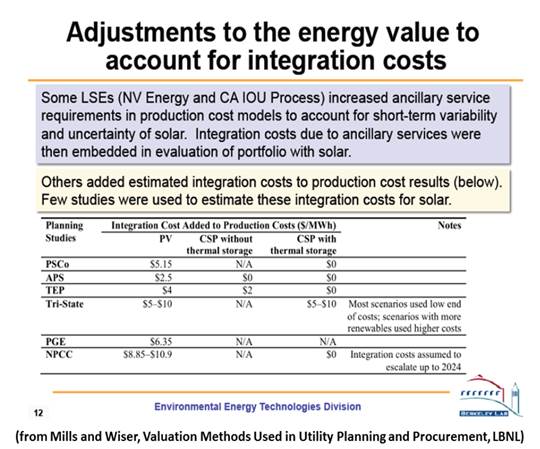