The Department of Energy sees big potential for solar thermal desalination technologies. But only if the costs can be brought down — way down.

That’s the goal of the 14 solar-thermal desalination research projects that won $21 million in DOE grants last week. The projects include many new desalination technologies such as forward osmosis, absorption distillation and supercritical extraction, as well as solar-thermal technology advances like cheaper mirrored trough collectors and lower-temperature storage systems. Others are aimed at proving out integrated solar thermal desalination systems in the field, and collecting data to identify the best opportunities for the technology.

Overall, the goal of the grants from DOE’s Solar Energy Technologies Office is to drive down the levelized cost of water to about 50 cents per cubic meter for municipal applications, and to $1.50 per cubic meter for industrial applications. That’s several times cheaper than the state-of-the-art technologies available today, according Dr. Avi Shultz, acting program manager for DOE’s Concentrating Solar Power program.

For example, reverse osmosis, the state-of-the-art technology for converting seawater into potable water, is “still relatively expensive, especially for the U.S. water market,” he said. The flagship U.S. plant opened in 2015 by Energy Recovery Inc. in Carlsbad, Calif., while highly efficient, still has costs that run about $1.80 per cubic meter, which is higher than the price of water even in parched San Diego County. Those high costs have created significant opposition to the project.

The challenge with reverse osmosis is that “there aren’t a lot of opportunities for reducing the cost,» said Shultz.

While electricity makes up a significant portion of its costs, «It’s relatively efficient with electricity, and there aren’t a lot of ways to reduce capital cost,” he said. 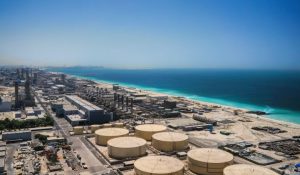 The U.S. government is putting millions into solar desalination.

Solar-thermal technologies are largely decoupled from the price of electricity. Instead, they’re mainly tied to how efficiently they can convert sunlight to heat — a metric DOE calls levelized cost of heat — and then use that heat to desalinate water.

There’s certainly a massive opportunity for desalination technologies that can beat today’s state-of-the-art projects. Desalination serves around 1 percent of the world’s population, or almost 746 million people. But some market forecasts indicate that figure could grow to more than one-tenth of the world’s population, as climate change and rising populations are expected to increase droughts and water scarcity.

DOE’s grant-winning projects are split up into four groups, Shultz said. The first, and largest, are exploring ways to “improve thermal desalination processes and efficiencies,” including a long list of novel membranes and methods to separate salt and other contaminants with water.

The simplest way to use the sun’s heat for desalination is to evaporate water and then condense it in a state free of salts and other contaminants. This is the fundamental idea behind many of the projects, he said.

“A number of projects are looking at technologies that don’t go through a distillation step,” Shultz noted. For example, the University of North Dakota, which won a $2 million grant, is using heat and pressure to put oil- and gas-well-contaminated water into a supercritical state, in which the salts crystallize and fall out on their own.

The second category of projects are centered on “new technologies for collecting and storing solar thermal energy, so they can deliver heat at a very low cost,” he said. This category includes a number of innovations that are also useful for providing industrial process heat — the lower-temperature steam heat that uses up about one-quarter of the country’s energy, Shultz noted.

SunVapor, a startup that’s building solar trough collectors out of treated wood instead of steel to drastically cut costs, has been working with partners like California grower Horizon Nut to provide heat to roast and dry pistachios. Its technology is also applicable to desalination, for example. SunVapor won a $1.5 million grant to work on a thermal energy storage system that uses the latent heat of phase-change materials, aimed at enabling 24-hour heat production at a levelized cost of 1.5 cents per kilowatt-hour.

The third topic area is “looking at the entire integrated system,” Shultz said. “We start from solar light and…[consider how] to develop an efficient integrated system throughout the entire process. What are the challenges to building that integrated system?” The Natural Energy Laboratory of Hawaii Authority, which already has both solar thermal and desalination systems on site, won a $2 million grant to study the pros and cons of work underway to integrate those two systems.

Finally, Columbia University won a $900,000 grant to develop an open-source software tool that combines two normally disparate data sets — solar resources and water resources — into a single, searchable countrywide map. That should be a very useful tool for researchers, entrepreneurs and investors searching for the solar thermal opportunities out there, noted Shultz.