The US Department of Energy has just cast a super-critical eye over its SunShot solar energy initiative in a suite of eight newly published reports, including one that zeroes in on the controversial field of concentrating solar power. The complexity and expense of concentrating technology has been attracting a giant stinkeye from some industry observers, but according to the Energy Department, reports of its death are premature. 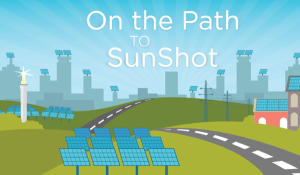 In fact, the way the Energy Department sees it, CSP will play a vital role in the ability of solar energy to penetrate more deeply into the mainstream grid mix.

For those of you new to the topic, concentrating solar power (CSP) refers to systems that collect solar energy in a wide field and focus it on a narrower field. A typical CSP system will use that focused energy to heat a liquid, which is then deployed to run a steam-powered electricity generator.

Not too long ago, CSP looked like a competitive alternative to photovoltaic (PV) systems, aka solar cells, which generate electricity directly from sunlight.

More recently, though, the cost of PV technology has been rocketing down (and it hasn’t hit bottom yet). CSP costs have also been falling, but not quite as fast.

Another stumbling block to market penetration is scale. PV systems easily scale down to just a few kilowatts, but the size and complexity of CSP requires megawatt-scale installations.

CSP does have one strong advantage highlighted by the Energy Department, and that is its built-in penchant for storing large amounts of solar energy in the form of heated molten salt.

Last fall CleanTechnica interviewed Fred Redell, Managing Director of the global CSP leader Abengoa, who made the case that CSP with energy storage has the potential to “revolutionize” the solar field.

That may have been a little premature in terms of today’s marketplace — the company has been restructuring this year — but the Energy Department still has its eye on the big picture.

Last fall, the agency awarded $32 million in new funding for its CSP: APOLLO initiative, aimed at next-generation improvements in concentrating solar technology, with the aim of bringing costs down.

The new funding, some of which went to Abengoa, builds on the success of a previous CSP R&D initiative.

The chart below gives you an idea of the size and scope of that initial commitment:

…and it describes the major technology improvements that have brought about the decline.

The Energy Department measures success against the SunShot goal of getting the cost of CSP down to 6 cents per kilowatt hour by 2020. According to the new report, CSP technology is “well on the path” to achieving that goal, one major factor being a decline in the cost of heliostats (those are the special mirrors used to focus solar energy on a collection point).

Unfortunately for CSP fans, the cost of PV is dropping faster, and the new report notes that “…CSP systems are more complex to develop, design, construct, and operate.” In addition, according to the Energy Department, in order to be effective, CSP systems need to be at least 50 megawatts, which greatly limits site selection.

Here’s the money quote, though:

However, the ability of CSP to use thermal energy storage—and thus provide continuous power for long periods when the sun is not shining—could give CSP a vital role in evolving electricity systems.

If you want all the details, the new CSP report is available as a free download. For those of you on the go, the gist of the argument is that if you want to have more variable energy — namely, wind and solar — in your grid, then you’ve got to have more energy storage.

The key point is whether or not CSP storage gets you closer to your grid goals than the alternative, which would be more PV with storage. The Energy Department refers to a recent report by the National Renewable Energy Laboratory on exactly that topic. That report examined the benefits of operational flexibility and capacity for both CSP and PV systems with storage, assuming a grid goal of 40 percent renewable energy. The report concluded:

The analysis found that the value of CSP, compared to variable-generation PV, demonstrated an increase in value of up to 6 cents/kWh under a 40% RPS.

The Energy Department’s basic case is that you can’t measure value to the grid just by calculating the cost of a solar system. You also need to factor in storage value, and by that metric, CSP systems can provide for a higher degree of grid flexibility.

The report takes it a step further by arguing that CSP has yet to realize its full strength in grid operations, due to competition from low cost natural gas. Under a scenario of low natural gas prices, the role of CSP systems is largely confined to “peaking” operations (peaking plants are constructed to provide additional power to handle peak load periods).

If the cost of natural gas rises, the options for CSP deployment are more broad. That’s especially true if lifecycle carbon emissions — and their costs — are factored in:

In that case, each of the CSP configurations compares very favorably against the conventional alternatives, with systems having intermediate to high capacity factor becoming the preferred alternatives. (Capacity factor is defined as the ratio of actual annual generation to the amount of generation had the plant operated at its nameplate capacity for the entire year.)

The Energy Department also notes that CSP’s affinity with thermal energy storage provides it with a potential lifecycle cost advantage, due to open questions about the cost and longevity of battery-type systems associated with PV.

The bottom line: despite the doubters, the Energy Department is fully committed to advancing CSP technology.

The CSP report is just one of eight new reports on the past, present, and future state of the US solar energy field, so stay tuned for more.