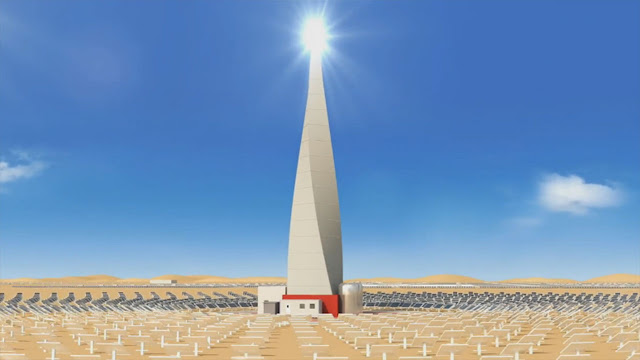 His Highness said that developing the UAE’s infrastructure is top priority for the leadership and vital to raising the country’s global competitiveness. «The UAE is developing a new model for sustainability and innovation and is keen to find creative solutions based on international best practices and benchmarks. The country is a pioneer in transforming its energy sector to one based on solar power and clean energy,» His Highness added.

«We will continue pursuing ambitious investments with an emphasis on projects that have a positive impact on people’s lives. Clean and renewable energy is key to sustainable development and the UAE has set an example for its rapid adoption,» said Sheikh Mohammed.

«We have developed a sustainable infrastructure that will serve new generations. This infrastructure has been built by young Emiratis who will lead our country through the next phase of growth. We are proud of our nation’s advancements in clean energy and green economy. The country is reaping the fruits today of the strong planning that we initiated years ago,» His Highness further said.

This CSP project, based on the Independent Power Producer (IPP) model, will generate 700MW of clean energy at a single site. The project, which features the world’s tallest solar tower measuring 260 metres and the world’s largest thermal energy storage capacity, will provide clean energy to over 270,000 residences in Dubai, reducing 1.4 million tonnes of carbon emissions a year. The CSP project will use two technologies for the production of clean energy: the 600MW parabolic basin complex and the 100MW solar tower over a total area of 43 square kilometres. This project, which features an investment of AED14.2 billion, has achieved the world’s lowest Levelised Cost of Electricity (LCOE) of USD 7.3 cents per kilowatt hour (kW/h). This is a new global achievement for the UAE.

HE Saeed Mohammed Al Tayer, MD & CEO of Dubai Electricity and Water Authority (DEWA) said: «I would like to extend my thanks and gratitude to His Highness Sheikh Mohammed bin Rashid Al Maktoum for honouring us with his presence today on the occasion of this important milestone in our progress towards sustainability. This pioneering Emirati landmark has become a global model based on a vision. It anticipates the future of a nation that sees sustainability as a life-long approach, and a basis for its progress and pioneering achievements for generations to come. President His Highness Sheikh Khalifa bin Zayed Al Nahyan has affirmed his commitment to continuing efforts to conserve the environment and enhance the sustainability of our natural resources. This continues the legacy of our nation’s founding father, the late Sheikh Zayed bin Sultan Al Nahyan, who once observed, Our environment and the resources within it are not ours. They are simply on loan to us, and in our charge. It is the responsibility of us all to care for them, and pass them on unharmed to future generations.»

«Today’s achievement supports HH Sheikh Mohammed’s directives to expedite the pace of clean and renewable energy projects, in order to secure a happy future and enhance the quality of life for our future generations in an economy that doesn’t rely on oil, realising the dream of His Highness Sheikh Mohamed bin Zayed Al Nahyan, Crown Prince of Abu Dhabi and Deputy Supreme Commander of the UAE Armed Forces, which has already become a reality. This will also achieve the Dubai Clean Energy Strategy 2050, which His Highness launched, to provide 75% of Dubai’s total power output from clean sources by 2050, and the UAE Centennial 2071, to raise the UAE’s status as the best country in the world,» Al Tayer added.

«We are guided by HH Sheikh Mohammed’s resolve and vision to achieve the Dubai Clean Energy Strategy 2050 to transform Dubai into a global hub for clean energy and green economy; establishing the Emirate as the city with the lowest carbon footprint in the world. Achieving these ambitious targets will require more than 42,000 MW of clean and renewable energy by 2050. This project is one of the most important projects that will contribute to these needs. It has a planned capacity of 5,000MW by 2030, with a total of AED 50 billion in investments, to accelerate the transformation towards solar power,» Al Tayer further said.

«The Mohammed bin Rashid Al Maktoum Solar Park will provide Expo 2020 Dubai with a dedicated capacity of 464MW of clean energy. This will be the first Expo in the world to be completely powered by clean energy. On this occasion, I would like to thank our partners in the consortium comprising Saudi Arabia’s ACWA Power and the Silk Road Fund, in collaboration with China’s Shanghai Electric as the main contractor, for their efforts and contributions in achieving our ambition to harness the sun,» added Al Tayer.

«The Mohammed bin Rashid Al Maktoum Solar Park is a global landmark and an important milestone on the road to sustainability that will also promote the happiness of the UAE’s citizens, residents, visitors and people from around the world,» concluded Al Tayer.

Commenting on the ceremony, Mohammed Abunayyan, Chairman of ACWA Power, said: «We are proud to be part of Dubai Clean Energy Strategy 2050 through this project, which extends our portfolio in the energy sector in Dubai and, thanks to the Dubai Electricity and Water Authority, proves the success and effectiveness of implementing projects based on a public-private partnership model. We have also demonstrated the success of our mission to reduce the price of solar energy and deliver the lowest tariff by implementing Concentrated Solar Energy (CSP) at a commercial scale – thereby contributing to the reduction of reliance on traditional energy sources. The project also set multiple world records including the world’s tallest solar tower, at 260 metres and delivering the world’s highest capacity molten salt storage unit – able to provide 15 hours of uninterrupted supply even without sunlight».

Paddy Padmanathan, CEO of ACWA Power, added: «24 hour dispatchable cost competitive solar energy that this project will deliver is not just a monumental step forward in achieving the goals of Dubai’s Clean Energy Strategy but is also possibly the most significant contribution to accelerating the energy revolution across the world. The investment of USD 750 Million ACWA Power is making into this project is also the single largest investment we are making in any project and thus a testament to our confidence in the Concentrated Solar Power technology and our commitment to the long-term partnership with DEWA and the Government and the people of the Emirate of Dubai».

«On behalf of Shanghai Electric, I would like to express warm congratulations on the groundbreaking of this project and gratitude to those who have been dedicating to making contributions in pushing forward the project. This project is by far the largest and most advanced concentrated solar power project co-developed by Dubai Electricity and Water Authority and ACWA Power, implemented by Shanghai Electric as EPC contractor,» said Cao Min, President of Shanghai Electric. «It’s universally acknowledged that Dubai is a dynamic and charming metropolis and Shanghai Electric is privileged and proud to witness its boom and prosperity. We’ve sensed the trust from the client and turn it into momentum to cater to whatever the client requires us with strong sense of responsibility,» added Min.

ACWA Power is a developer, investor and operator of a portfolio of power generation and desalinated water production plants currently with presence in 10 countries including in the Middle East and North Africa, Southern Africa and South East Asia regions. ACWA Power’s portfolio, with an investment value in excess of USD 30 billion, can generate 22+ GW of power and produce 2.7 million m3/day of desalinated water to be mostly delivered on a bulk basis to state utilities and industrial majors on long term off-take contracts under Public-Private-Partnership, Concession and Utility Services Outsourcing models.

ACWA Power pursues a mission to reliably deliver electricity and desalinated water at the lowest possible cost, thereby contributing to the social and economic development of the communities and countries it invests in and serves.

ACWA Power strives to achieve success by adhering to the values of Safety, People and Performance in operating its business.

Concentrated solar power systems generate solar power by using mirrors or lenses to focus a large area of sunlight onto a small area – unlike PV, which generates power through the photovoltaic effect. Electricity is generated when the concentrated light is converted to heat, which drives a steam turbine connected to an electrical power generator.