The Noor Midelt project is one of the initiatives under the Noor Solar Plan, which aims at producing a total capacity of 2,000 MW by 2020. The first phase of Noor Midelt is expected to consist of two 400MW hybrid concentrated solar power (CSP) and photovoltaic (PV) plants. For each project, 150 to 190 MW would be provided by CSP with minimum of 5 hours storage. 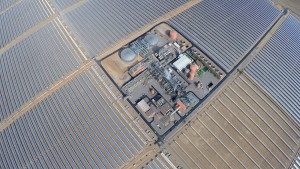 As CSP Focus reported earlier this January, The Moroccan Agency for Sustainable Energy (MASEN) officially announced three groups have answered the tender, and the next-step commercial bidding is expected to open around the middle of 2018 and the final result will be confirmed by the end of this year.

As one of the key players joining the bidding, The French EDF would like to share valuable experience and feedback in project development, financing and EPC during the bidding preparation period, and Mr.Olivier BORDES, Development Project Director Middle-East Africa of EDF, will speak more on the upcoming CSP Focus MENA 2018 event in Marrakech, Morocco during June 27-28, which will be the can’t missing gathering for CSP industry players watching Middle East & North Africa region. At the same time, MASEN and ACWA Power, also the project key involver will be presenting their thoughts during the conference.

As Olivier talked to CSP Focus, CSP-PV hybrid is a good way to combine and take full advantage of the two major solar power technologies. Especially for the development of CSP, hybrid with PV is undoubtedly a great choice. However, there indeed exist some challenges in the execution, since the systems of CSP and PV are totally different. Questions like how to balance well the outputs, and the EPC work of each system deserve further and deeper study and communication. “During the  CSP Focus MENA 2018  conference, we would also like to hear from the suggestions from CSP technology and component providers, and find out how to better reach the CSP project expectations like NOOR Midelt.”

Compared with another model of solar power combination, Integrated Solar Combine Cycle (ISCC), Oliver seems to prefer CSP+PV hybrid, “Personally speaking, I think ISCC is more complicated, and faced up with some practical problems. The ISCC project requires more in the location.”