The Kathu Solar Park contract was awarded to eltherm by a consortium comprising ACCIONA, ENGIE South Africa and SENER Engineering and Construction. The company will deliver EHT to the solar park’s Thermal Energy Storage (TES), Heat Transfer Fluid (HTF) and balance of the plant (BOP).
Advertisement 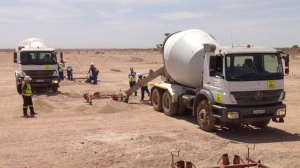 Globally, eltherm is among others responsible for the heat tracing at the Noor Ouarzazate Solar Complex in Morocco, as well as Ashalim Power Station in Israel.
Advertisement

The installation
The TES which features the plant’s molten salt storage will compromise the majority of eltherm’s EHT installation where temperature classes of T1 – T3 will be maintained.

EHT is required in CSP plants to maintain temperatures and prevent heat losses.

Essentially, EHT pre-heats empty pipes and equipment to maintain the right temperature throughout the process and to avoid solidification of the fluids. It also compensates for the loss of heat when fluids flow to pipes with a lower ambient temperature.

The Kathu Solar Park’s EHT system will be managed by eltherm’s innovative TraceVision software and controllers that enable efficient and uninterrupted operations at the plant. It is estimated that the plant’s parabolic trough technology will provide up to five-hour TES storage capacity to meet peak energy demand, after sunset.

The eltherm EHT installation phase of the Kathu Solar Park is scheduled to start at the end of 2017 and will take approximately six to eight months to complete.