Enneray has won the tender published by IRESEN (Institut de Recherche en Energie Solaire et en Energie Nouvelles) related to the realization of a 1 MW Plant with unique and innovative features for the Country: it’s a LFC (Linear Fresnel Concentrator) with flat mirrors and a total area of 11.400 square meters, for a total amount of 6.000.000 EUR. The construction involves local companies for an amount of more than 20% of the total plant value, meaning a great integration between Italian and Moroccan Companies.

The project has been financed by OCP (Office Chérifien des Phosphates), world’s leading producer of phosphate rock and derivatives, and is aimed at studying the productivity and reliability for a future application in its mines.

Besides this Plant, Enerray has already installed a small PTC (Parabolic Trough Concentrator) with parabolic mirrors: this has been done for the solely purpose of analysis and research.

CSP-ORC System is usually applied in industrial applications and processes in order to generate heat and electricity.

CSP-LFC technology coverts solar radiation into thermal energy thanks to a concentrator made of flat reflective surfaces (Fresnel Mirrors) which focus sun’s rays on a receiver (Receiver Tube), in which there’s a special fluid for heat storage (Thermovector Fluid – in this case Diathermic Oil). Concentrator and Receiver create the Solar Collector, provided with a tracking system that allows it to follow the apparent motion of the sun.

The heat stored by the fluid is subsequently transferred to the ORC – technology part of the Plant (made of turbine, condenser, evaporator, alternator, etc.): this lets the thermic energy produced be converted in electric energy. ORC cycle has been settled with air condenser, in order to avoid the use of water and being particularly applicable in water-poor locations. 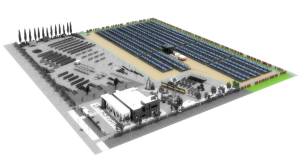 ORC system has been supplied by EXERGY, leader in the construction of patented radial-flow turbines to be applied in CSP Plants (and other kinds of plants) and having a fundamental advantage: management and maintenance is easy and can be done with a remote control, fully integrated in ORC Plant.

CSP-ORC system can be integrated with a Heat Storage System (Storage), which lets the Plant work even when it’s cloudy and during the night (i.e. even in low/no- light conditions).

The completion of the electromechanical part of the Plant is scheduled by the end of June 2016, whereas the Plant is planned to be operative in between August/September 2016.

“The plant of Ben Guerir – says Michele Scandellari, Enerray CEO – represents an opportunity for differentiation compared to traditional photovoltaic. After this, already under construction, the installation of other pv systems will follow, particularly for phosphate mines that represent the most important mining of Morocco. We trust that this country will become a major market for the solar industry in the coming years.”