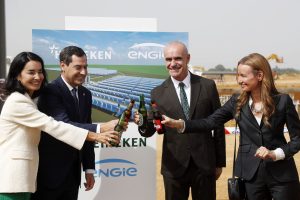 The EUR-20-million CSP project will result in a self-consumption scheme that will produce thermal energy for Heineken’s beer factory, enabling the brewer to reduce fossil gas consumption by over 60%. Earlier this year,

The facility will be located on Heineken’s factory grounds in Seville where Engie will put up 43,000 square metres mirrors. The solar field will occupy some eight hectares, equivalent to eight football pitches.

The system will also have storage in eight 100-cubic-metre tanks to allow for heat production for five to six hours at times when there is no solar radiation.

The project represents the first time in Spain that a thermal energy self-consumption setup is installed on a large scale in an industrial setting, the press release reads.

Construction works on the CSP plant will be finalised in June 2023.

The whole effort is part of the goal that Heineken’s Spanish unit adopted to achieve net-zero emission production by 2025, five years ahead of the parent group’s 2030 target.