The aim of the EU-funded MACCSOL project has been to develop more efficient dry cooling technologies.

A cutting edge system is being developed to deploy more solar-based energy plants, enabling the delivery of cleaner power more efficiently, while keeping Europe at the leading edge of energy technologies.

The aim of the EU-funded MACCSOL project (‘The Development and Verification of a Novel Modular Air Cooled Condenser for Enhanced Concentrated Solar Power Generation’) has been to develop more efficient dry cooling technologies. The project’s new ‘modular air-cooled condenser’ (MACC) incorporates sensors that can detect changes in temperature, ambient wind, and fan flow rate, all of which control algorithms to continuously vary fan speed. It can thus maintain optimum condenser pressure and temperature irrespective of ambient conditions. 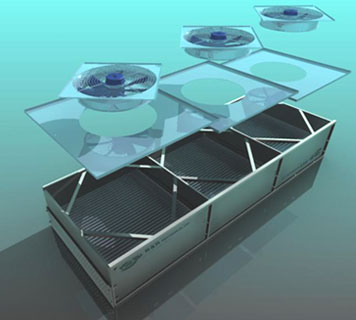 The consortium, which received EUR 4 million in EU funding, is led by Ireland’s University of Limerick and includes three universities and four industrial partners.Together they are working to eliminate the use of water in cooling concentrated solar power (CSP) plants and minimising the lifetime cost of dry cooling systems.

Project coordinators say the new MACCSOL should enable CSP plants to increase net power output while reducing costs. Because the MACC is modular in design, installation and maintenance costs will also be significantly reduced.Researchers have been focussing on key tasks, such as characterising and optimising the performance of individual system modules. Fan control algorithms have also been developed and interfaced with new temperature and flow sensors.

At system level, module layouts have been investigated to assess the possibility of harnessing the wind to assist fan operation.Both system- and module-level development has involved the use of numerical simulation, analytical modelling, physical scale modelling, and measurements on full scale prototypes. Techno-economic modelling is also being used to assess the life-time cost implications of various design options.

If successful, the long term economic and societal impact of the project could be significant.

First, it would mean CSP deployment can be increased, including in desert areas without water, and the cost of electricity generation could be reduced. MACCSOL researchers believe their system can deliver a 2 % per kilowatt-hour reduction in the cost of CSP generation, compared to existing dry-cooled systems.

With CSP already expected to make a significant contribution to the EUs 2020 renewable energy targets, the improved economic and environmental performance delivered by MACCSOL could make a difference. Indeed current figures show that, even using current cooling methods, each gigawatt generated by CSP reduces carbon dioxide emissions by approximately 273 tonnes.

Thus, MACCSOL aims to improve environmental performance while achieving a monumental technological advancement, to ensure EU is at the forefront of dry-cooling technologies for CSP electricity generation, with all of the potential economic benefits in terms of jobs and growth.