On the occasion of the recent acquisition by Grupo T-Solar of two Solar Thermal power plants with parabolic trough technology, which represents an aggregation of 100 new MW of management, we started an examination of this other type of solar energy. 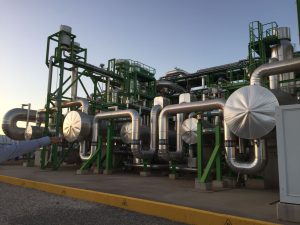 SOME ASPECTS OF THIS TECHNOLOGY SO THE COMPANY BETS FOR IT:

Spain leads the world production of thermoelectric solar energy and is indisputable world leader, since the set of solar thermal power plants installed in our country account for 72.85% of all installed power on the planet »

It is an evolving technology: The pipeline of solar thermal plants under construction is growing and is currently focused on Middle East and Maghreb (MENA) countries, followed by India and China.

It is a technology that allows to combine with other renewable sources – hybrid systems (hybrid systems with gas or in areas with steam demand) that undoubtedly is what drives the growth of this technology.

SOME DATA ON THERMAL SOLAR ENERGY AT GLOBAL LEVEL.

The report «Solar Thermal Energy» published by IDAE, 2006, collects: «Europe represents only 9% of the world market of solar thermal energy with an installed power of 10,000 MWth (thermal MW) at the end of 2004 (…) Germany, Greece, Austria and Spain, together, represent 78% of the installed capacity in Europe (Data from the Report of the Federation of the European Solar Thermal Industry of June 2005) (…) Germany continues (…) as the undisputed leader in Europe , with 4,000 thermal MW installed and an area of ​​5.7 million square meters (…) Greece is the second European country in terms of market volume. With 14% of the total installed area in the European Union (…) Spain is the fourth European country in the use of solar thermal energy, ahead of countries such as Italy, France and Great Britain. With 6% of the total European market (…) Of the 10,000 new m2 that were installed each year in the 90s, we have moved to average growth above 60,000 m2 in the first years of 2000, until reaching the 90,000 in the year 2005 «.

According to this same report: «Solar thermal: an installed power of 98.4 GW thermal at the end of 2004 (Data from Solar Heat Worldwide 2004, considering 41 countries that represent 57% of the world population and 85-90% of the world solar thermal market). As regards the distribution of solar thermal energy by countries, the world market continues to be dominated by China (…) China, followed by Japan, Turkey, Germany and Israel with high growth rates in recent years. Among them, special attention is drawn to the development of solar energy in Israel, where around 85% of homes are equipped with solar thermal sensors «.

On 06/20/2012 helionoticias.es published an article entitled «Solar thermal energy in Europe», in which we can read the hegemonic role that our country had in Europe at that time, with respect to solar thermal energy. We review your data:

-The production of electricity from solar thermal power plants (CSP) increased by 193% in 2011 compared to 2010. Spain is still the only country in the European Union that has developed the large-scale solar thermal sector and, by the end of 2011, it concentrated all of Europe’s solar thermal commercial operations within its borders, with 1,151 MW of installed capacity. If we add the capacity of the four prototypes commissioned in the European Union, the total capacity of the latter was 1,157 MW at the end of 2011.

-New solar thermal installations came into operation in 2011 (with a combined capacity of 420 MW), all located in Spain. Eight of them are of the parabolic channel type, each with a capacity of 50 MW.

Víctor Comas, in September 2012 and on the Interempresas.net website, titled his article «Spain leads the global production of solar thermal energy», from which we extract the following paragraph: «The one of the thermoelectric solar energy is one of the few sectors in those that Spain is indisputable world-wide leader, since the set of the thermoelectric solar power stations installed in our country suppose 72,85% of all the installed power in the planet «.

Ren 21. Renewable Energies 2016 World Situation Report: «In 2015, Morocco (160 MW), South Africa (150 MW) and the United States (110 MW) built new concentrating solar thermal installations online, raising the total world capacity around of 10%, about 4.8 GW. The new facilities represent a combination of parabolic technologies (see the allusion to the parabolic-cylinder technology in this article) and of tower, and all incorporate thermal energy storage (TES for its acronym in English). At the end of the year, concentrating solar power capacity (CSP) was under construction in Morocco (350 MW), South Africa (200 MW), Israel (121 MW), Chile (110 MW), Saudi Arabia (100 MW), China (50 MW) and India (25 MW), reflecting a shift from traditional markets (Spain and the United States) to regions with high levels of direct direct radiation (DNI). » .

We clearly see the leadership position held by Spain at the global level with regard to Solar Thermal Concentration Energy (CSP) at the end of 2015.

As it has been published, the two plants recently acquired by Grupo T-Solar, the Morón project in Seville of 50 megawatts and the Olivenza project of 50 megawatts in Badajoz, use the latter type of Cylinder-Parabolic technology (without storage in molten salts).

According to this APPA report, Spain is the second country in the world in percentage of renewable patents on total patents, second only to Denmark. For Protermosolar.com the number of patents requested (by our country) in the last twelve years is 948.

If we consider the Spanish Solar Thermal expressed in terms of C.C. A.A. and of the m2 of new surface installed in 2016, we have:

Regarding the same parameters but considering the accumulated surface:

As it could not be otherwise, given the solar advantage of this community compared to the rest, it is Andalusia that leads the installation of these solar thermal plants.

According to data from Protermosolar, solar thermal energy increased its production of electricity in 2017 to reach a generation of 5,347 GWh in the accumulated of the year, representing an increase of 5.5% over 2016.

If we read the composition of the Spanish electric mix last year, we will observe that THE SOLAR SOURCE ENERGY (PHOTOVOLTAIC + THERMAL SOLAR) EXCEEDS 5% OF THE GENERATION TOTAL.

In this regard, the emphasis put by the CEO of Grupo T-Solar, Marta Martínez Queimadelos, on the synergy that occurs between the two technologies (which constitutes the traditional portfolio of the group, plus the new acquisition) acquires full meaning.