The concentrating solar power plant will produce 100,000 MWh of electricity per year, meeting the needs of 26,000 people.

It has taken FCC just over two years to complete the construction of its first solar thermal power plant in Spain. The Guzmán plant, in Palma del Río (Córdoba), was inaugurated this morning by Antonio Ávila, Minister of the Economy in the Andalusian Regional Government, and Eduardo González, General Manager of FCC Energía. The plant became fully operational just a few days ago.

FCC, the Citizen Services Group, created a 70:30 joint venture with Japanese company Mitsui to build the plant (50 MW), which cost around 280 million euro and involved more than 500 workers at its peak.

At the inauguration, Mr Ávila highlighted “the effects of this project, in local and overall terms, on advancing towards energy sustainability as a source of wealth and growth”. He also noted that Andalusia is the leading region in Spain in terms of solar thermal power facilities, with 950 MW operational (61% of the total in Spain), and it exports that technology through innovative R&D projects, which are then developed at Andalusian universities and at the Solar Platform and the Advanced Technology Centre for Renewable Energy, both in Almería. Córdoba is the second Andalusian province in terms of installed solar thermal capacity, accounting for 31% of the regional total. 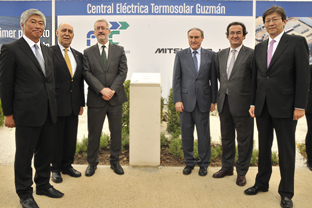 Mr González noted that Guzmán “represents a milestone for FCC because it exemplifies our progress in renewable energies. We headed the development, funding, construction and operation of the plant with the invaluable help of our partners: Mitsui, on the investment side, and FCC Industrial, Abantia and Seridom, on the construction side”.

The plant will benefit from its ideal location in Palma del Río: it is one of the best sites in Europe in terms of insolation, and it has easy access to water and gas supply and suitable power offtake structures. The plant will produce enough energy to meet the electricity needs of 26,000 people (around 100,000 MWh) and will reduce emissions by approximately 100,000 tons of CO2.

FCC Energía focuses on the development and application of technology for generating electricity from solar, wind and water energy, and from waste. The company has 421 MW in operational wind assets and 22 MW operational photovoltaic capacity, as well as two solar thermal plants (100 MW) under construction and other concessions (150 MW) in Spain. FCC Energía also operates in the UK, where it has 100 MW in projects under development.

FCC is a citizen services group which operates in the areas of infrastructure (cement, construction and industrial services), environmental services, water, and energy. It has a presence in more than 55 countries and a staff of over 90,000.