A pilot project in the Gobi Desert that generates energy out concentrated solar power by using mirrors or lenses to concentrate a large area of sunlight onto a small area, is the first of its kind of China and breaks a number of records in Asia, in terms of installed capacity, tower height, light concentration, heat storage and construction duration. It is able to continuously generate electricity for 24 hours and can help reduce carbon dioxide emissions by 350,000 tons each year. The energy will supply 1 million households. 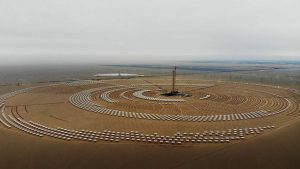 This solar thermal system capture sunlight to heat liquids that can easily be stored to later run electricity generating engines. This is more practical than using mere photovoltaic solar panel technology that directly converts sunlight to electricity, which can not be stored for later use as easily as a thermal system’s heated liquids.

The designed heat storage is 15 hours, thus, it can guarantee stable, continual power generation for the region.