The concentrating solar thermal power plant is spread over 700 hectares and can already be appreciated from the air when the region overflies. Cerro Dominador Concentrated Solar Power project, in María Elena, already has 7,000 heliostats that point to a tower where electricity is generated. This initiative will be one of the highlights at the COP25 Conference, for contributing to the renewal of the energy matrix. 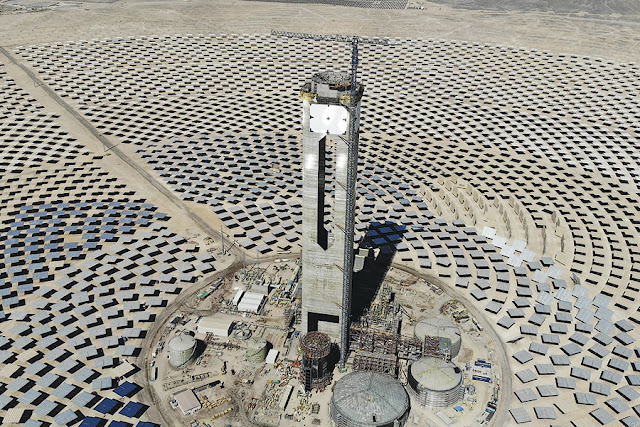 94 km away from the town of María Elena, in the desert of the Antofagasta Region, with high temperatures and no humidity in the air, the Cerro Dominador Concentrated Solar Power power plant, the first of its kind in Latin America, is being built. This initiative is considered key with a view to the elimination of coal from the energy matrix by 2040, since it is estimated that it will prevent the emission of about 640 thousand tons of carbon dioxide (CO2), which causes global warming. This figure is equivalent to 357 thousand cars being withdrawn.

The project promoted by the company EIG Energy Global Partners -with an investment of US $ 1,400 million- contemplates the installation of a total of 10,600 heliostats, that is, mirrors that capture solar radiation, and that are being installed around a building of 250 meters, slightly lower than the Costanera Center, in Santiago. The heliostats will point to a receiver that will be at the top of the tower where salt will circulate -mineral that will be heated to very high temperatures-, with the aim of producing steam. In this way, a turbine will be activated that will generate electricity that will be injected into the national grid.
Fernando González, CEO of the project, explains that the works have an 80% advance: «We have more than seven thousand heliostats installed and the receiver is being finished». It is expected that the solar thermal plant will begin its white march in December and that in May of next year it will be possible to start injecting electricity into the National Interconnected System.

The total power of the solar thermal reaches 110 MW. In parallel, the company has in a neighboring property a photovoltaic park that has 300 thousand panels, of a similar capacity.
Therefore, the executive says that the solar thermal power plant «will produce electricity 24 hours a day, which is an advantage when compared to other generation projects.»
This type of initiatives already work in the United States, Dubai, China, Spain and Morocco, but in Latin America it is an unprecedented fact, for which the project will be highlighted by the Chilean government in the framework of the COP25 Conference of the Parties, which will be held in Santiago in December.

The Minister of the Environment, Carolina Schmidt, argues that the penetration of renewable energies is «fundamental», taking into account that Chile has set a goal of achieving «carbon neutrality, a task that is not simple for developing countries.»

The initiative will produce employment for the area. So far, to build the facilities requires a camp of 1,000 workers trained in various trades, such as electricity, assembly and transportation, among others.

About 400 people -the majority of Maria Elena’s commune- work in an industry section assembling the mirrors that will capture the light, and a third of the staff corresponds to women. One of them, Romina Arancibia (37), says that she joined the project three years ago: «I went from taking care of my daughters to being an operator of heavy machinery».

Another group of women is dedicated to assembling the panels, for which they have shown special dedication and care with the installation of the pieces.