The Fraunhofer-Gesellschaft (Munich, Germany) is investing in a new solar research center in South America.

The aim of the new Fraunhofer Center for Solar Energy Technologies, founded by the Fraunhofer Chile Research Foundation and located in Santiago de Chile, is to better exploit the solar energy potential in the sun-rich country, thereby reducing the dependence on fossil fuels.

With particular emphasis on regional implementation, the focus shall be on the further development of solar thermal and photovoltaic (PV) technologies and applications with partners from research and industry.

Scientists from the Fraunhofer Chile Research Center for Solar Energy Technologies (FCR-CSET), the Fraunhofer Institute for Solar Energy Systems ISE (Freiburg, Germany) and the Pontificia Universidad Católica de Chile will together perform research on electricity and heat production using solar energy. Now the new research center for solar energy was inaugurated in the presence of the Chilean undersecretary of Energy Jimena Jara.

The official opening ceremony of the Fraunhofer Chile Research Center for Solar Energy Technologies (FCR-CSET) was held on the campus of the Pontificia Universidad Católica de Chile (PUC). Present at the event were the Chilean undersecretary of Energy Jimena Jara, the German Ambassador to Chile Hans-Henning Blomeyer-Bartenstein, the Vice President Research of PUC Sol Serrano and the Executive Vice President of CORFO Eduardo Bitran, who jointly opened the new research center. 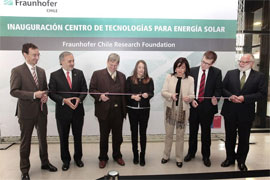 In her welcoming address the Chilean undersecretary of Energy Jimena Jara highlighted:

“We are very happy to support the activities of FCR-CSET and we will follow with much interest their results. We hope they will contribute not only to the development of the renewable energies in Chile, but also to the emergence of an industry that can lead our country towards a solar economy.”

“Chile offers ideal climatic conditions combined with a challenging environment for solar research. Our intention is to combine this potential with the know-how and network of all partners, including Fraunhofer institutes, in order to promote photovoltaic, solar thermal and further technologies needed for the transformation of the energy system to sustainability, and to help implement those in Chile.”

The purpose of the newly founded Fraunhofer Chile Research Center for Solar Energy Technologies (FCR-CSET) is to support the development of a sustainable solar economy in Chile, with the assistance of Fraunhofer ISE’s vast experience in the field. The main focus at FCR-CSET will be the production and storage of electricity and process heat as well as water treatment using solar energy.

First projects are to gather reliable radiation data for future solar power plants and to monitor a solar process heat system installed at a winery.

“The country of Chile has the highest global direct solar radiation in the world. At the same time, the Chilean climate places high demands on the reliability of materials and components.”

Fraunhofer ISE holds extensive expertise in both of these areas. Scientists at Fraunhofer ISE have been working on solar thermal and concentrator applications for many years. They also specialize in testing materials and components under extreme climate conditions and apply their expertise to develop new procedures in order to improve the long-term stability.

“In Chile we can build on our experience in international R&D and so strengthen synergies in bilateral cooperation,” remarks Dr. Werner Platzer, Division Director of Solar Thermal and Optics at Fraunhofer ISE.

“Our job is to find solutions that have shown success under similar boundary conditions and to customize these for the country of Chile, involving local industry and science from begin on.”

On the evening before the opening, a course of workshops entitled “The Transformation of our Energy System” has commenced. Every two months, a workshop will be held where Chilean and international experts will discuss specific themes of solar technology.

With the Fraunhofer Chile Research Center for Solar Energy Technologies (FCR-CSET) the Fraunhofer-Gesellschaft strengthens its involvement in Chile.

In January 2011, the Fraunhofer Chile Research Center for Systems Biotechnology (FCR-CSB) opened its doors in Chile. Both centers were founded under the auspices of the Fraunhofer Chile Research Foundation and are co-sponsored by CORFO, the Chilean Economic Development Agency. With its departments of engineering, chemistry and geography, the Pontificia Universidad Católica de Chile (PUC) is one of the most important academic partners of the FCR-CSET as well as a founding member.

Scientists and engineers at the renowned university will work at FCR-CSET; the laboratories and offices of FCR-CSET are located on the university campus.