Gemasolar, owned by Torresol Energy and designed and built by the engineering and technology group SENER (www.sener.es), is the only project that represents Spain as the image of the country in the European Union campaign “Together for the climate” in the COP21, the Conference on Climate Change that will take place in Paris from November 30 to December 11.

The European Union has chosen this facility, the first to produce electricity non-stop with solar energy alone, for being a global icon for sustainability.

Gemasolar is a pioneering plant that applies, in a commercial scale, central tower receiver and heat storage technology using molten salts, as well as numerous technological solutions developed by SENER, a leader in the global Concentrated Solar Power (CSP) market. Thanks to its high temperature storage system, the plant can continue producing electricity for 15 hours without sunlight, meaning it can generate power non-stop and respond to the grid’s demand, which has been traditionally a weak point of renewable energy. Currently operated by Torresol Energy, a SENER Group company, it has been running since 2011 and its results exceed expectations.

In fact, this great performance has triggered SENER to replicate the same configuration at the NOORo solar complex, the biggest in the world. Formed by three solar thermal plants and another one with photovoltaic technology, SENER is carrying out this project as part of the turnkey construction consortium. SENER will complete the three thermosolar phases (NOORo I, NOORo II and NOORo III) and the third one, NOORo III, with 150 MWe, will be a central tower plant with molten salt receiver five times bigger than Gemasolar.

Gemasolar is an emblematic facility in the renewable energy sector. Its innovations are continuously recognized with international awards such as DESERTEC 2014, The European Energy Awards 2013 – which recognized SENER as Engineering Company of the Year for this project – and the Merit Award given by the International Federation of Consulting Engineers (FIDIC), which included the facility among the best global engineering works of the past 100 years. 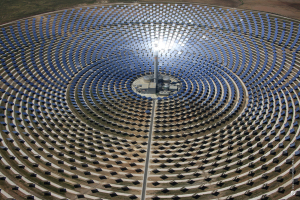 At the same time, prestigious brands are to link themselves to Gemasolar’s image – Louis Vuitton, Mercedes Benz, Ford, Peugeot and Sony, among others – and have chosen this plant as a setting for their international campaigns. Recently, it hosted an international fashion catwalk.

After the election of Gemasolar as Spain’s image for the COP21, the Plant Manager, Raúl Mendoza, stated, “Gemasolar represents the future of power plants and it is a symbol of SENER and Torresol Energy’s commitment with future generations. Our aim has always been to introduce and test new technologies to make solar energy an economically competitive option and, therefore, a real and sustainable alternative to traditional energy sources”.