Regarded as the foremost technical conference in oil and gas exploration and production, this is the first time SPE ATCE is being hosted in the Middle East in its 92-year history. Its theme this year is ‘E&P 2.0 – Transforming and Shaping the Future’.

GlassPoint’s solar technology has been specifically developed to meet the growing economic and environmental challenges associated with heavy oil production. Giving details of its innovative energy solution, GlassPoint’s Director of Project Development Marwan Chaar said: “Today, the production of oil resources is incredibly complex. A lot of energy is consumed in the extraction of heavy crude. Typically, for every five barrels of heavy oil, the energy equivalent to one barrel is consumed in the production process. The leading method of producing heavy oil is steam flooding, a technique that injects steam into a reservoir to heat the oil and reduce viscosity, making it easier to pump to the surface. GlassPoint’s solution uses the power of the sun to generate steam, replacing vast amounts of natural gas traditionally burned in the process.” 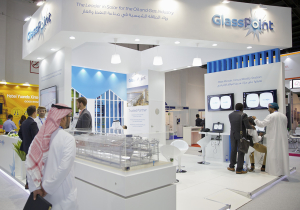 “GlassPoint has developed an energy efficient, economical way of supplying steam to the oil industry. We are helping operators cut their costs and energy consumption significantly, which are vital considerations with today’s low oil prices,” Chaar added.

Noting the considerable interest GlassPoint’s steam generators are attracting from energy industry experts at SPE ATCE, Hussain Shehab, Kuwait Country Chair, GlassPoint added: “Solar grants oil operators with the flexibility to reduce their reliance on conventional steam generation sources. GlassPoint’s solar steam generators can cut an oilfield’s natural gas consumption by up to 80% and significantly reduce carbon emissions. The gas saved can then be directed to the export market, used for power generation, or to develop new industries.”

Following a successful pilot in Oman with Petroleum Development Oman (PDO), GlassPoint was awarded a commercial-scale project, called Miraah, in July 2015. Currently under construction, Miraah will be one of the world’s largest solar plants in the world. This landmark project will deliver over one gigawatt of peak thermal energy, generating 6,000 tonnes of steam per day. The steam will be used in PDO’s thermal enhanced oil recovery (EOR) operations to extract heavy and viscous oil at the Amal oilfield in southern Oman. 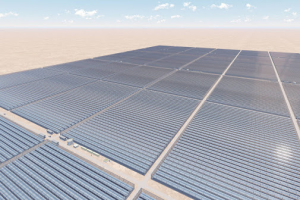 GlassPoint Solar is the leading supplier of solar to the oil and gas industry. The global oil and gas industry consumes an amount of energy equal to 10% of its own production, making it one of the biggest markets for renewable energy. Operating worldwide from the Middle East to California, GlassPoint’s enclosed trough technology delivers the lowest cost energy to power oilfield operations. By harnessing sunshine, instead of burning natural gas or other fuels, GlassPoint helps oil producers reduce operating expenses while significantly cutting greenhouse gas emissions.

GlassPoint is one of the fastest-growing solar companies in the world with more than than one gigawatt of solar oilfield projects under construction. The World Economic Forum recently recognized GlassPoint as a 2016 Technology Pioneer for its role in enabling more economical and sustainable oil production.

GlassPoint established its regional headquarters in the Sultanate of Oman in early 2012. The company’s major shareholders include Royal Dutch Shell and State General Reserve Fund (SGRF), the largest sovereign wealth fund in Oman.