This Global Atlas is the largest initiative of its kind to date, and is intended to help countries and corporations to determine the potential for renewable resources worldwide.

During its Annual General Meeting in Abu Dhabi, the International Renewable Energy Agency (IRENA) made the world’s first global atlas for renewable resources public. The atlas comprises databases and maps that are freely available on the Internet.

The German Aerospace Center (Deutsches Zentrum für Luft- und Raumfahrt; DLR) has contributed substantially to this development through its expertise in the modelling of energy systems, remote sensing technologies and the processing of geodata.

This Global Atlas is the largest initiative of its kind to date, and is intended to help countries and corporations to determine the potential for renewable resources worldwide.

It brings together data and maps from leading technology institutions and private corporations. At this time, data relating to solar and wind power can accessed. Data relating to other kinds of renewable resources will follow in 2013 and 2014. 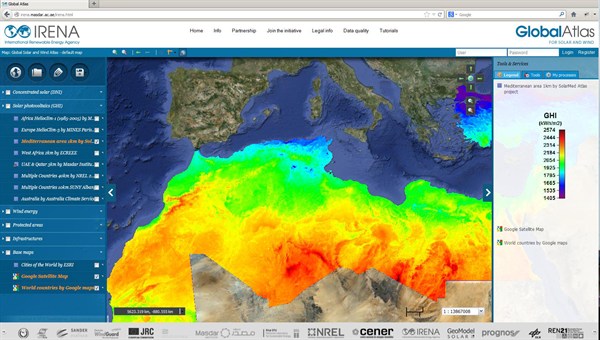 The Internet-based platform, which can be viewed at www.irena.org/GlobalAtlas, is intended to raise awareness of the renewable resources available across the globe and to help those countries wishing to invest in their development. "In the next 10 years we expect a sharp rise in the investments in renewable energies. The Global Solar and Wind Atlas will help us make the right decisions," says Martin Lidegaard, Danish Minister of Climate, Energy and Building, and President of the third session of the IRENA Assembly. The Global Atlas is also a powerful tool for the expansion of renewable energies in the eyes of Adan Z. Amin, Director-General of IRENA: "With 22 countries now taking part, and more expected to join in the coming months, it is a clear sign of our growing political will to transition to clean, renewable energy."

The open, flexible Internet portal was developed under the leadership of the Systems Analysis and Technology Assessment department of the DLR Institute of Technical Thermodynamics in Stuttgart. Carsten Hoyer-Klick, the coordinator of the technical team said: "With our expertise in the modelling of energy systems, remote sensing technologies and the processing of geodata, we are ideally positioned to assist an international team of scientists from some of the world’s leading institutions." The institutions involved in the development of this portal included the National Renewable Energy Lab (USA), Mines-ParisTech (France) and the Masdar Institute (United Arab Emirates).