In a desert region of southern Australia is a farm that – without the use of soil, fresh water, or fossil fuels – grows and supplies 15 percent of the entire country’s tomatoes through state-of-the-art technology.

Earlier this month Sundrop Farms marked the launch of what it called the “first commercial-scale facility of this calibre in the world”, which uses solar power to de-salinate seawater and operate greenhouses in order to grow more than 15,000 tonnes of the red fruit each year.

Their tomatoes are being sold in hundreds of markets across the country.

In a statement released on Ocober 6, the company said in comparison to conventional greenhouse farms, its “cutting-edge, sustainable technology” will save significant amounts of natural resources and avoid a substantial level of pollution.

“Approximately 26,000 tonnes of carbon dioxide per year” would be avoided, which is “equivalent to removing 500 cars from our roads”, it said.

The statement also said it could save fresh water – the equivalent of 180 Olympic size swimming pools – and more than two million litres of diesel per year.

In an email to Al Jazeera, Sundrop Farms explained its sustainable growing methods. “Tomatoes are grown hydroponically in coconut coir, eliminating the need for soil.

“Our concentrated solar tower produces both heat and electricity to maintain the perfect conditions inside the greenhouses to help the plants grow. This heat is also used to de-salinate one million litres of seawater a day; the fresh water produced is used to water the plants and cool the greenhouses.”

The company said the $200m venture may have been costly to build, but it has substantially less operating costs than conventional greenhouses because of its sustainable nature.

“In the long run this means that we can cut down on expensive, harmful inputs like fossil-fuels, meaning that our operating costs are significantly lower than traditional greenhouse operations.”

Sundrop Farms said it sees itself as a potential model for countries facing shortages in fresh water and energy supplies.

Mike Dixon, director of the Controlled Environment Systems Research Facility (CESRF) – a department at the University of Guelph in the Canadian province of Ontario – told Al Jazeera as “food security becomes a pressing issue with growing populations … energy is usually a limiting variable”.

He said although Sundrop Farm’s system may work well in desert regions in the Middle East, it would not be practical economically in places with an abundance of fresh water such as Canada. 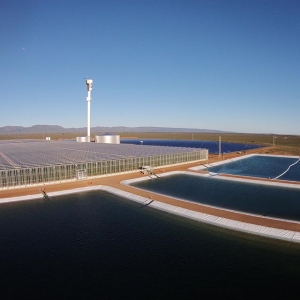 But Dixon noted while the world has seen a boom in vegetables and fruits using controlled environments, fundamental staple foods such as rice, soy, and wheat cannot be grown at the same level using greenhouses.

“You can not compete with conventional farming … it

[greenhouse production] will never achieve the same on those staple products. You need hundreds of thousands of acres for staples like rice to produce it in a highly competitive way.”

Asked whether Sundrop Farms’ techniques could be applied globally, he said it depends on each case.

“It all comes down to money. This bussiness plan will last only as long as its profit margin is in the black … if the company can economically use seawater.

“It is not a business case that can be made everywhere… [It] depends on how costly the water treatment is in each area. Each business case has to be looked at as its own business model.”