Among concentrated solar power plants, solar tower systems are considered to have the greatest potential in terms of efficiency and cost reduction. In particular, costs can be saved on mirrors (heliostats), which account for between 30 and 40 percent of the investment. Frequent calibration or control of the heliostat aim points is one approach. In the HelioControl project, the Fraunhofer Institute for Solar Energy Systems ISE developed a calibration and control system based on digital image processing for heliostat fields. With this method, the aim points of many heliostats can be determined for the first time during operation in a timely and cost efficient manner. 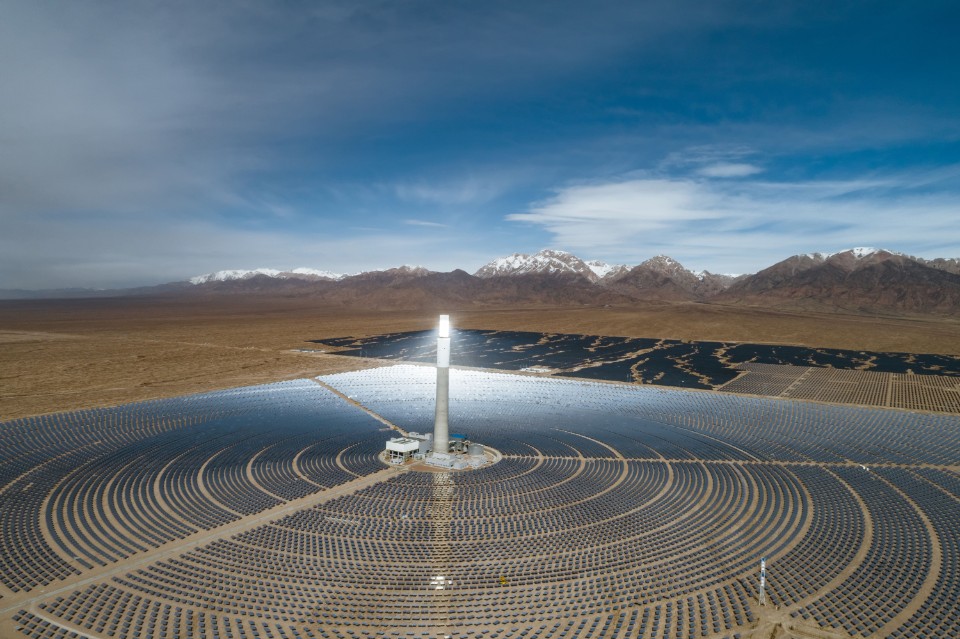 Schematic structure of the image processing control system «HelioControl» for the verification and adjustment of aim points, as closed control loop and as plug-in for existing commercial solar field control systems.

In concentrated solar thermal tower power plants, there can be several hundreds, tens of thousands or even hundred thousand mirrors that concentrate the sun’s rays onto a central absorber (receiver) at the top of a centrally located tower. The generated heat is transferred to a heat transfer medium (e.g. molten salt), which is used to generate steam and drive a turbine. In conjunction with a thermal storage unit, the stored heat can also be used to generate electricity at night.

Since the mirrors tracking the sun reflect the radiation over distances of up to one kilometer, even small angular deviation of aim points lead to large losses in power plant efficiency. Although the control system sets the mirror position using a sun-tracking algorithm, it is not known whether deviations between the targeted and actual coordinates exist or how large these deviations may be during operation. During power plant construction, the heliostats are precisely aligned and they are regularly recalibrated and adjusted via control parameters during operation. This measure, however, demands considerable time and costs from power plant operators of large heliostat fields with many thousands of mirrors. When calibration procedures require reduced effort or are carried out with a closed-loop control, cost reduction potentials can be expected through savings in the structure or drive system.

Control based on digital image processing

The goal of the HelioControl project, which was funded by the German Federal Ministry for Economic Affairs and Energy BMWi, was to develop an efficient camera-based calibration and control system for heliostat fields.

During operation, the aim points of individual mirrors are identified from the total concentrated flux density distribution. A video of the irradiated receiver is recorded with a camera. By modulating a periodic movement of the mirror, a signature is introduced into the flux density distribution at the receiver, which can be associated to the individual mirror and its contribution. By using different frequencies, the aim points of several mirrors can be determined simultaneously. «Using digital image processing, the actual aim point of the heliostat is determined. If this deviates from the targeted aim point, the values are transferred to the heliostat control for correction,» explains Dr. Gregor Bern, project manager at Fraunhofer ISE.

For the new method, the Fraunhofer ISE project team developed software that allows aim points to be measured in parallel during operation. After laboratory testing, the system was deployed in the heliostat field at the Themis tower power plant in France. The results are promising. The aim points determined from the images are usually only a few millimeters from the actual aim point. The closed-loop control circuit was also successfully demonstrated.

«Theoretically up to two heliostats per second can be measured in parallel with the HelioControl system. This means that a power plant the size of Noor III in Morocco with 7400 individual heliostats can be recalibrated in less than one hour instead of several weeks as was previously the case,» says Gregor Bern.

By measuring the aim points and making a corresponding readjustment, the demands on the intrinsic precision of the drives and on the gear backlash in the power transmission are reduced. The precise and homogeneous alignment of the aim points also avoids so-called «hot spots», i.e. local regions with excessive temperature, which can cause severe damage to the receiver. This increases both the lifetime and the thermal efficiency of the receiver, as it can be operated closer to maximum temperature.

Using simulation models, the project team calculated measurement speed, potential savings and possibly increased operating consumptions of the heliostat motors. The researchers calculated a savings potential in the field of at least 5 percent for a reference model. This is a considerable amount in view of investments of several hundred million euros for a power plant.

Since the HelioControl algorithm uses industry-oriented interfaces, it can be easily integrated into existing power plants. It can also be used for the optimal calibration of heliostats during power plant construction. The Fraunhofer ISE project team is presently looking for further partners for demonstration and commercial application of this approach in large tower power plants.