Heliogen, a leading provider of AI-enabled concentrated solar power, today announced that the United States Bureau of Land Management has awarded the Company the exclusive right to lease land in the Brenda Solar Energy Zone (SEZ).

Heliogen intends to develop a green hydrogen facility on the Brenda site, capable of producing approximately 20,000 metric tonnes of hydrogen per year. The Brenda SEZ is situated on 3,343 acres of land in La Paz County, Arizona on the California border. The site has direct access to Interstate 10 for distribution of hydrogen to nearby natural gas pipelines for blending and transport, as well as to the Phoenix metropolitan area and the Port of Los Angeles for domestic and international shipping. 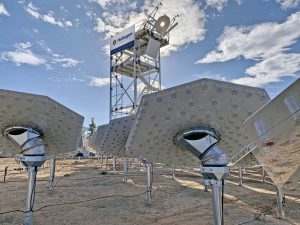 “The Brenda SEZ is an ideal location for commercial-scale green hydrogen production due to the ample local water supply and its close proximity to potential offtake partners and key distribution channels,” said Bill Gross, Chief Executive Officer of Heliogen. “We look forward to providing updates on our plans to develop the facility and will leverage our proprietary, AI-enabled concentrated solar power technology to produce cost-effective green hydrogen. We are grateful to the Bureau of Land Management for their support and clarity throughout the process and are looking forward to continuing our work together.”

Heliogen’s AI-enabled concentrated solar energy system is designed to create non-intermittent, carbon-free steam, electricity, and heat from sunlight. When combined with Bloom Energy’s proprietary solid oxide, high-temperature electrolyzer, hydrogen can be produced 45 percent more efficiently than with low-temperature polymer electrolyte membrane (PEM) and alkaline electrolyzers. Electricity accounts for nearly 80 percent of the cost of hydrogen produced from electrolysis, and by using less electricity, hydrogen production is more economical, accelerating its adoption. In addition, the ability to use heat, which is a much lower cost source of energy than electricity, further improves the economics of green hydrogen production.

Project development is one of the many ways Heliogen can support customers looking to deploy its novel solar technology. Heliogen leverages its in-house expertise, led by Chief Commercial Officer Tom Doyle, to develop project sites on behalf of customers who take an owner/operator role.

Heliogen is a renewable energy technology company focused on eliminating the need for fossil fuels in heavy industry and powering a sustainable future. The company’s AI-enabled, modular concentrated solar technology aims to cost-effectively deliver near 24/7 carbon-free energy in the form of heat, power, or green hydrogen fuel at scale – for the first time in history. Heliogen was created at Idealab, the leading technology incubator founded by Bill Gross in 1996. For more information about Heliogen, please visit Heliogen.com